Do you have questions about condoms you are embarrassed to ask? We don't blame you, and you are probably not alone. In this article, we put together answers to condom frequently asked questions. The following is a random list not sorted in any particular order. 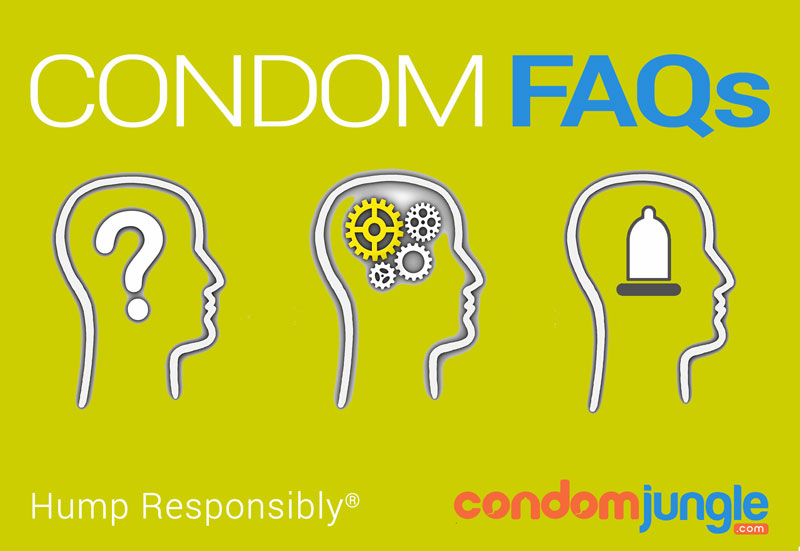 The answers below are not a substitute for any medical advice and are provided for information purposes only. Contact your doctor if you have any medical issues or concerns.

Now that we've got that out of the way, let's begin.

The first question is very typical for anybody young and just getting sexually active.

1. How old do you have to be to buy condoms?

Condoms are available everywhere around you. You probably passed a few places just walking down the street today. The good news is that you don't have to be a certain age to buy condoms in the U.S.

You don't have to show your ID or any form of identification that shows your age.

We recommend buying condoms online to avoid any embarrassing and awkward moments.

Also read: How old do you have to be to buy condoms?

2. How to know what condoms to buy for your boyfriend?

First of all, we have to say what a thoughtful girlfriend you are that you want to shop for your boyfriend.

There are several ways you can go about this:

Yes, condoms are perishable and will expire at some point. The expiration varies but will typically be anywhere between 3-5 years.

The condom lifetime depends on a few other factors like proper storage. Even condoms within the expiration date may be "spoiled" due to inadequate storage that primarily involves heat or cold.

4. Is my dick big enough for a Magnum condom?

Yep, some of you are asking this question. All that we can say is that we have no idea. Is it? The best way to find out is to try it.

Magnum is a line of large and XL condoms so if you feel the others don’t comfortably serve the purpose, give this line a try.

5. How to measure penis size?

Whatever your reason might be for desiring to measure your penis size, we know that it does help you figure out what condom to buy. To answer your question in more detail check out our penis measuring tips article.

6. What are the best condoms?

There is no correct answer to this question and here is why. Any condom that you like how it feels is the best condom for you regardless of the brand or type. You should never settle for a single brand or style because without trying a bunch you could miss out on something that would become your best condom.

Only use condoms that have quality certifications like FDA or similar international standards. All the leading condom brands have those so you can have peace of mind that your rubbers are top-notch.

Condoms help reduce the chance but cannot 100% eliminate the risk. They are your best bet when it comes to STD defense. That’s why it’s a great idea to learn how to use a condom more effectively.

8. Why do some condoms have flavors?

Condom manufacturers continually work to make condoms more appealing to more and more users. Making condoms in a variety of flavors serves that purpose. Having banana, orange or strawberry flavored condoms is just fabulous, isn't it?

Flavored condoms are just one of the available categories. Check out what other types of condoms are out there.

9. How do you know if you’re allergic to condoms?

We don't think that there is a such a thing as allergic to condoms. If you are referring to allergic to latex condoms that is a different story.

Some people are sensitive to natural rubber latex, and for those individuals, there is an alternative option in the form of non-latex condoms.

10. What are signs of an allergic response to latex?

Some people sensitivity to natural rubber latex or, more specifically, to the additives in the material. Allergy symptoms are individual and can range from mild skin redness or a runny nose to more severe conditions.

Moving on to the questions about condoms number eleven.

11. What are the chances of getting pregnant without using a condom?

Another thing to remember is that the pull out method does absolutely nothing to protect you against STIs. Why take the risk when condoms help so much?

13. Can you get pregnant if you use a condom?

Condoms are very effective in preventing unwanted pregnancies. These devices are rated as high as 98%. Their effectiveness varies slightly with you, the user.

Let’s explain. To get the max effectiveness you need to use these babies correctly. When we say using condoms correctly, we mean storing them properly, using the right size and before the expiration date, and most importantly, using them every time you have sex.

If you do all that, it’s highly unlikely you’ll get a surprise pregnancy.

14. Can a condom fall off during intercourse?

Condoms sometimes do fall or slip off during intercourse for a variety of reasons. Loss of erection due to not enough arousal is one reason or because the condom is too tight or too loose is another.

16. Are condoms effective against HIV and other sexually transmitted infections (STIs)?

Condoms help prevent the transmission of HIV and other STIs though they cannot eliminate the risk 100%. Correct and consistent use keep you as safe as possible.

17. How are condoms tested?

During the manufacturing process, condoms undergo a series of tests such as air burst, water burst, and tensile tests.

18. Can I use lubricants with condoms?

When it comes to condoms, lubrication is important but you need to use a lube that is compatible with the condom. Generally, compatible lubricants include water and silicone based varieties.

Condoms are not reusable. There are several reasons why you should not reuse them such as sanitary issues and potential damage.

The first thing you should do is to check the expiration date. However, remember that even non-expired rubbers might not be in usable condition. Factors such as storage conditions come into play.

You can also check the wrapper for holes or little punctuations. Except for a visual test you can do the following: Gently press the wrapper with your thumb and index finger. You should feel a small air pillow. If the wrapper is damaged, it would be flat with no air inside. Also, the lubricant inside the wrapper would be leaking out.

Moving on to the questions about condoms number twenty one.

A condom is a form of birth control worn by men to capture semen. The device provides a barrier that helps in preventing STDs and unintended pregnancies.

22. How many parts are there on a condom?

Condoms are simple devices but if you look closely, there are a few parts to them. There is a base which is at the bottom where the thin ring is. Then there is the body, head, and the tip. Since condoms come is several shapes the "anatomy" can slightly vary, but the principle is the same.

23. What are the most important condom facts?

There are a bunch of condom facts so let's name a few. They have a shelf life and also come in sizes. Not all of them made of rubber. There are no hormonal side effects and lastly, they are effective.

We have a whole article on this that you should read if you want to learn more about the facts.

Practice makes perfect, and that is true about prophylactics too. If you never had sex try putting on a condom a few times before you doing the real thing. That way you won't be nervous when the time comes.

25. What are reasons why condoms break?

There can be a variety of reasons but it comes down to common sense. In most cases, it's the user’s fault for that. If you want to learn more check out our why condoms break article.

26. Why should I use non latex condoms?

You should use latex free condoms if you are allergic and sensitive to latex. That way, you can have safer sex regardless this health concern. Some non-latex condoms are so good, people who don’t have this sort of latex allergy still like using them.

We're in the home stretch now! Approaching the last three questions about condoms we have for you today.

27. How many condom shapes are out there?

Condoms come in several shapes, and there is no definitive number since manufacturers (brands) slightly vary their products. There are a few distinct groups of condom shapes. Check out the link in the previous sentence for more details.

28. How many condom brands are available today?

There are many condom brands all over the world. From small and big and everything in between. There are only a few major condom brands, however. We carry the well-known and trustworthy brands in our selection...

Condoms are available everywhere they sell drugstore products. They can also be available in a very limited offering at gas stations and convenience stores. But why would you even go to the store to buy a product like condoms?

We live in an age where we have almost everything at our fingertips.

Nowadays, buying condoms near you means turning to your smartphone or laptop to place an order. Your merchandise ships to your address in discreet packaging. It’s so easy.

30. Are there vegan condoms?

Sure there are. A brand like Kimono markets their condoms as vegan-friendly, meaning they contain no milk/animal protein.

That's it. Those were your common questions about condoms. Our mission here at CondomJungle is to educate you about condoms so you can use them with confidence and accomplish your "task" of being safe and sound.