How Are Condoms Made and What’s Their Quality Control

It's hard to believe that condoms, those male climax-capturing devices, have been around for hundreds of years. From early, rather primitive versions to modern day, many times electronically tested products, their quality has thankfully evolved noticeably over the centuries. So how are condoms made and what's their quality testing today? 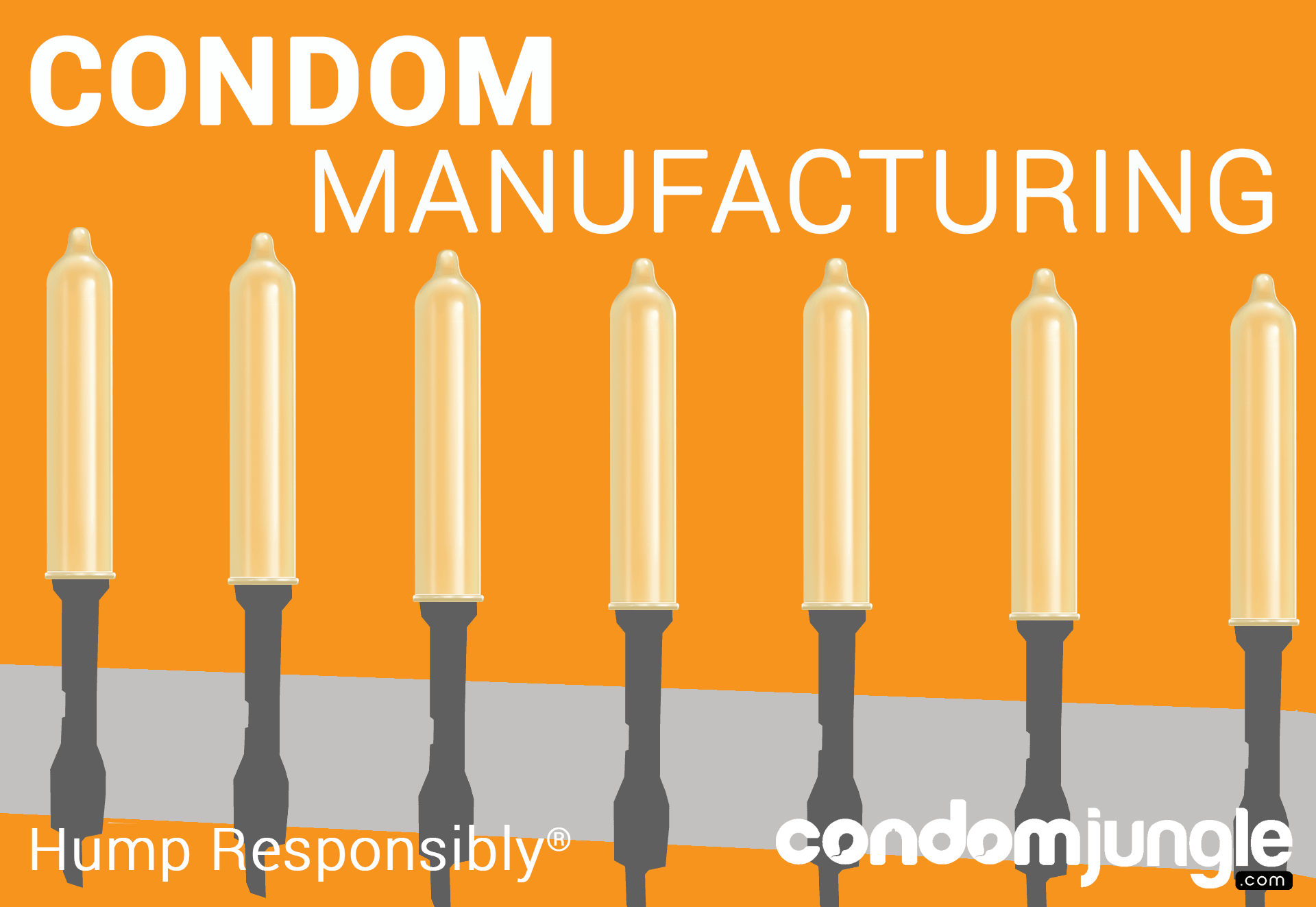 The invention of the rubber vulcanization process, which dates back to the 1850s, allowed for the introduction of rubber condoms. Throughout decades of manufacturing innovation, the natural rubber latex used for condoms became thinner, more durable and also more comfortable.

Come with us as we take a tour through the condom manufacturing process, including its high-quality control.

From rubber trees to your bedroom

It all starts by extracting the milky substance from rubber trees then ends between the sheets in your bedroom. That, of course, is very simplified. What happens in between during the manufacturing process is quite impressive and way more involved.

Before we get into the mechanics of the manufacturing process, let’s look at a couple of things first.

Put on that medical device

The quality of condoms is under the strict regulatory guidelines of the FDA. This U.S. government institution keeps a close eye on the quality of this medical device. Yes, that's right, condoms fall into the category of class two medical devices. We bet you didn't know that you put a medical device on your penis every time you engage in safer sex.

Because condoms keep you healthy and safe, only use name brand products, not some party balloon lookalikes, whose quality and origin is unknown. Also, always be mindful of where you buy your stash.

Condoms have many nicknames, one of which is rubbers. This fitting name comes from the fact that, as mentioned, the majority of these devices are made from natural rubber latex. This stretchy and body-contouring material happens to be ideal for its pleasurable purpose.

Currently, there are four materials used to make condoms: latex (rubber), polyurethane, polyisoprene (synthetic) and natural (animal intestines). It’s good that there are condoms made of more that just rubber because some individuals are allergic or sensitive to this material. Non-latex condoms refer to any prophylactics made with a material other than latex (i.e. contains no rubber allergens).

In recent years, the SKYN Condoms product line from LifeStyles has been a trailblazer with the polyisoprene material. Polyisoprene is a medical grade non-latex material with very similar elasticity characteristics minus the latex. Natural rubber latex, however, remains the go-to material for condoms at least for now.

How are condoms made

It’s time to get into the nitty-gritty of condom making.

The manufacturing process of natural rubber condoms is quite impressive. In the next few paragraphs, we outline the stages of how natural latex turns into condoms of all shapes and sizes. Although similar, sans the rubber ingredient, we’ll save the process of making non-latex condoms for another time.

Latex tapping is the process of extracting the milky latex from a rubber tree. The rubber tree is a more common name for the tree called Hevea brasiliensis. These trees thrive in the rainforest environments of South America and Indonesia. That's where the latex for today's condoms mostly originates.

Manufacturers’ contractors do the tapping process at night or early morning when the air temperature is relatively low to keep the latex in its fresh, pure liquid form.

After the collection process, workers place the natural latex into temperature-controlled tanks. That is where they keep the substance in its unchanged form, preventing the latex from coagulating.

Now it's time to distribute the pure latex to production facilities around the world and make those condoms.

Condom brands test the latex quality throughout the whole manufacturing process to ensure the highest standards for the condom material.

The latex compounding has several stages and is basically a curing process. In this stage, latex gets its characteristics for condom strength, thinness, softness, etc.

In short, everything is mixed, making it ready for the next production step. This is where the machine automatization, or computer-managed, the process starts turning the white, milky looking liquid into condoms.

After the latex compounding, it's time for the visible condom making to begin. The manufacturing line has spinning glass molds that run through the dipping tank to produce a thin layer of latex. The dipping is repeated twice to ensure the thickness is sufficient to create a light yet durable film of latex. The temperature of the latex in the dip tank is typically around 15°C.

In the next step, the spinning, dipping glass molds have to go through the drier. After the latex dries, the rotating brush cleans the bottom of the condom, forming what is the thin ring. A 10-minute, oven-curing process follows.

Now it's time to remove the condoms from the molds with high-pressure water.

A whole batch of condoms is washed and dried with a solution that leaves a layer of powder on the latex surface. This prevents the condoms from sticking to each other.

Every single condom undergoes an automated inspection for holes.

This stage of the production process places each condom onto a mandrel. A mandrel is a metal mold in the shape of a condom that conducts electricity. The condom-covered mandrel goes through an electrical field. If the condom is defective, either with a microscopic pinhole or weak spots, the test detects such defects because the electricity runs through it.

The machine automatically expels these faulty rubbers from the batch. Condoms that pass the microscopic pinhole test are rolled up into their flat disc. That's the same look you see when you take one from the wrapper.

The electronic current testing is a reliable test that ensures that all condoms that enter the wrapping stage are top quality.

We talk later about another kind of random testing that each batch of condoms has to pass.

In this stage, condoms go through a packaging line where a machine squirts lubricant onto each one. This is the last time we see that condom before it's sealed into a wrapper.

Once sealed inside the wrapper, condoms head towards the last stop in the manufacturing process.

The last packing stop places condoms into retail boxes. This is their final look.

We also want to note that each of the wrappers, as well as the retail box, is marked with the product expiration date.

The manufacturing process is over, and condoms are ready for distribution.

We mentioned how brands test condoms throughout the whole manufacturing process. This ensures that condoms are safe and effective, providing a substantial barrier between sperm and STD pathogens. Now it’s time to elaborate on more of the testing that happens.

What is the quality control testing?

There is a regiment of tests in several production stages to make sure condoms are free from defects. Factories use water and air to measure material durability.

Below is a list of additional tests that every batch has to undergo.

The airburst test also called the air inflation test, measures the amount of air that condoms can absorb before bursting. The “airburst” tests condoms for elasticity and strength. On average, this test inflates condoms with 25 liters of air per minute.

The tensile test stretches condoms to see how durable the material is. A ring is cut from the condom mid-body and stretched to its maximum before breaking. Most latex condoms spread more than 750 times their original width.

Factory labs also test condoms for aging. There are even more tests but these are the main ones.

As you can see there are a bunch of quality checkpoints. Prophylactics have to pass all of them before they end up in your hands and on your instrument of pleasure.

We hope that our quick tour gave you a glimpse of how manufacturers make condoms, including their quality control measures. The next time you buy a box of condoms, appreciate all that went into making them.