The Condom wrapper is an inseparable part of every condom. Without it, condoms couldn’t exist because they couldn’t survive in functional condition for too long. 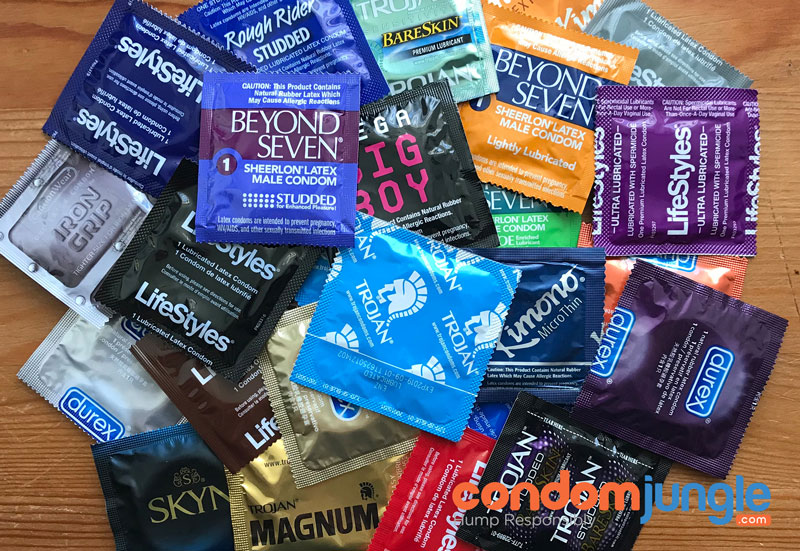 In most cases, we don't even take a second look at the wrapper since it's the last thing we worry about in those intense and passion filled moments. We rip the wrapper open, wasting no time to get things moving along.

No matter how beautiful it might look, who wants to waste valuable moments, while in full erection, staring at the condom wrapper?

For that reason, the upcoming paragraphs shed a spotlight on wrappers because they deserve some attention, too.

A condom wrapper is a factory-sealed, airtight packaging, which encases the condom until its time for the party. Look at it as protection that protects another kind of protection.

Why are condoms in wrappers?

Most of us don’t really think about condoms being medical devices but the FDA does. In fact, they are Class 2 devices, which means the FDA puts strict measures on the manufacturing process so you don’t have to worry about crappy quality.

The wrapper protects the condom from not only physical damage but also from material deterioration that could happen over time.

Let's admit, we don’t always treat condoms that gently. We stuff them into our backpacks, luggage, purses or pants pockets. We also leave them inside overheated cars. You name it. Doing any of this isn’t wise, as condoms tend to suffer some damage along the way. In turn, that damage potentially affects the level of protection you get from the otherwise effective contraceptive device.

There are other reasons, including, perhaps the most obvious, being sanitary. You want your condom to be clean, fresh and in top condition before using it and it's only possible if it's in the wrapper.

What's the wrapper made of?

Manufacturers use a thin plastic foil to make wrappers. Some have a layer of coating that prevents us from seeing inside on both sides or may be clear and see-through, typically on the backside. Rarely do we see wrappers with both sides see-through.

Manufacturers approach a wrapper's appearance in a variety of ways. Some keep the outside design simple and some, on the other hand, make it much more interesting to look at.

The backside, in most cases, includes the "fine print", such as expiration date, legal warnings and other information from the manufacturer.

How to check a condom wrapper for holes?

You can make a quick visual and also physical check to see whether or not the wrapper has any damage.

Do you know how the famous lover Casanova did his condom quality control? Check out our history of condoms article to find out more about his technique. By the way, we don’t recommend doing what he did. You shouldn’t mess with condoms until you unroll on them onto your penis.

Next time you hold an unopened prophylactic, gently press the wrapper with your index finger and thumb. You should feel a slight air pillow or a sort of liquid feeling from the inside of the wrapper. That typically means there is no damage to the wrapper because the air and the lube are not leaking out. By damaged, we mean hard-to-see small punctures or tears to the wrapper and possibly to the condom itself.

The lubricant will most likely seep outside a condom wrapper with a puncture, appearing flat without the air cushion we mentioned earlier.

If you have a non-lubricated condom, there’s obviously no need to check for any lubricant spill even if there is some damage.

Instead, you'll only feel a slight air pillow inside the wrapper. If that's not the case and the foil appears flat, you know that the air leaked out. Time to grab another rubber.

Some condoms come in strips connected one to another.

If you are not careful, you can easily tear the wrapper by accident when trying to separate the two condoms.

You’ve probably come across a variety of condoms during the course of your sexual adventures, so you know that the condom wrapper shape is almost exclusively square. However, you find some deviations, including rectangles or even circles.

Though this usually varies from brand to brand, a standard condom wrapper size is around 2.5" x 2.5" (57mm x 57mm). Trojan makes some quite significant in comparison. For example, Trojan Ecstasy Condoms have a wrapper 2.84" x 2.84" (72mm x 72mm). That is also true for Magnum, which are larger size condoms. Current LifeStyles, SKYN and Durex wrappers are pretty standard in size. ONE circle wrappers are 2.36" (60mm) in diameter.

Condom wrapper design keeps evolving — from very plain, even dull, years ago to vibrant, colorful, sexy, funny, artsy… You name it. Manufacturers do their best to make sure the outside of their retail boxes look great and in some cases match the wrapper design.

You might have challenges opening any condom wrapper when your fingers are slippery from lubricant or bodily fluids. For that reason, we recommend pre-opening the wrapper before the "action."

The last thing you want is to say, “Dang it, why can’t I open this thing” when the time is right.

FYI, you can tear either of the two jazzed-edge sides to get to your goods.

As you can see, wrappers are an essential part of every condom. Sometimes, they even make the condoms look a bit more hipster or cool.

Next time, right before you put it into action, stop just for a second to appreciate the condom wrapper.

We know that the last statement probably won’t happen, but we at least tried.