Learning about shapes in geometry is a bit of a bore to some. Learning about condom shapes, on the other hand, especially those designed to help you fully enjoy your favorite intimate activity, is much more enticing. 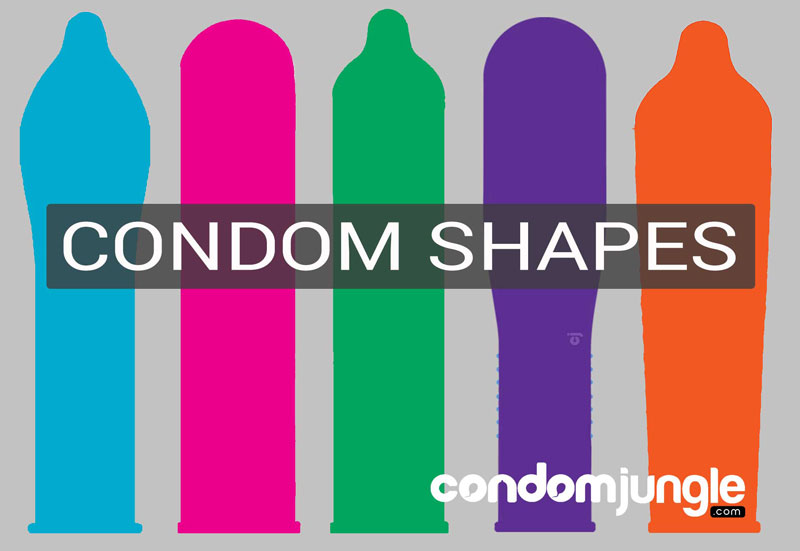 Most people think of condoms as pretty simple, lookalike rubber devices for capturing the result of a man's most joyful moments. That’s mostly accurate until you take a closer look…

In this article, we explore all the condom shapes that are available for you to add to your safer sex arsenal.

In short, it is the form, silhouette or contour, if you will, that outlines the condom anatomy. As you'll see, there are several shapes out there.

The 3-pronged purpose of condoms

As you well know, there are several reasons for wearing a condom during sex, two of which are very obvious.

1.Prevention Preventing you from unintended pregnancies

2. Protection Protecting you against common STDs

There is a third reason that many users may not even realize.

3. Pleasure Enhancing the feel and consequently your pleasure

Users automatically expect prevention and protection. So disregarding these two primary reasons for a moment, pleasure, a condom’s secondary purpose, is certainly more fun to talk about.

Looking back from the time condoms were invented until today, how blessed and fortunate we are now to have all the options currently available.

The short answer is yes because shapes can create a specific feel for their users. That being said, the level of your penis’ sensitivity determines whether a particular condom shape makes a difference for you.

That’s why manufacturers don't limit their condoms to only the standard shape. We talk about that one, and others, coming up.

How many condom shapes are out there?

There are several shapes you can choose. Generally speaking, every condom brand has some distinctive shapes that may separate them from their competition.

Below is a list we assembled by pulling together all the shapes and separating them into several groups. We named the groups either by general industry terms or what we thought would better describe the condom’s appearance for you.

The straight wall condom shape is basically what its name tells us. It has the same width, straight from the top to the bottom, and it has a “reservoir tip”, which is that little extra up top.

This is a classic, without a doubt, though today it is a bit rare for latex condoms. On the other hand, SKYN Condoms sport the straight form in their line of non latex condoms.

This shape, unless your penis is extraordinarily disproportional (very large or the opposite), works well across most demographics.

What we just described in the previous paragraphs applies to this category but minus the reservoir tip. These are also rare but still around.

We currently carry a single product like this, and it's the Naturalamb. Read a bit more about lambskin condoms because they also have a significant differentiator from any other condom out there.

Unlike the previous category, which is very straightforward, this one has a bit more variety. The reason is that it features a few similar yet slightly different shapes.

This shape is standard and widespread across all condom brands with a few small variances such as the size of the “bulbous end”. The industry also affectionately refers to this design as the light bulb style.

Speaking about prophylactics, the words flared and tapered basically mean the same thing. LifeStyles uses the former while Trojan uses the latter for their Magnum Condoms. If you happen to bump into them while browsing CondomJungle.com, know that it's just two different brands saying the same thing.

We already mentioned the lack of reservoir tip when describing the straight shape. Condoms in this shape category are way more unique than that. The looser section (in the half closer to the head of the penis) of the condom allows better freedom of movement, which may result in a better feel and experience for some users.

Learn more about the few examples below by navigating to their subsequent pages.

Not all condom brands have the entire selection of shapes in their product line up. Some manufacturers only use one or two shapes then add studs, texture, ribs and flavors among others features to their condom varieties.

We put together the offerings from a few major brands to demonstrate the diversity of the shapes.

Let's start with the brand that dominates.

It’s safe to say that Trojan is a big believer in offering a variety of condom shapes based on the diversity in their lineup. They have condoms in all the categories we named above. Their 30+ product selection is so extensive it basically covers everything.

Durex is very conservative when it comes to shapes. They favor their Easy-On style featuring the bulbous end (light bulb), practically across their whole lineup, which is slightly fitted right below the lightbulb/head area. Durex also has the Straight wall (reservoir end) on the Durex iNViSiBLE.

LifeStyles offer most of their condoms with the bulbous end (lightbulb) shape and includes a reservoir tip on top. This is a popular and proven conventional form.

The “Lightbulb” as you can see on the Kimono Micro Thin XL is a favorite shape across all brands.

Note: The particular size of the “light bulb” shape varies by brand and specific products.

Men have very different user experiences when it comes to condoms because of the highly personal nature of the product. More specifically, the sheer variety in that particular area of the male anatomy makes it almost impossible to state what are the best condoms because “best” is an elusive term. Condoms that fit well and that you like are the best.

What shape is right for you?

We already touched on this, but your private part’s physical proportions and sensitivity ultimately has the last say.

Now, it's your turn to try as many condom shapes as possible. We bet you like doing this kind of homework.

Let us know in the comments about your favorite, and until next time Hump Responsibly® and we'll see you around at CondomJungle!