Passion is an interesting phenomenon. It takes over, dominating your senses, your loins and your mind, making it hard to think about anything other than the intense sexual moment that’s about the happen. The experience is so titillating, none of us really want to think about the most common STDs before, during or after. Not exactly romantic or sexy, right?

It might be hard to admit, but STDs are as much a part of sex as the fun and pleasure it brings. Unless both partners are committed and have only been with each other… STDs can certainly come in to play.

Quick hook-ups and one-night stands are risky territories, especially if you don’t include condoms as a part of the occasion (remember, they help reduce the risk of possible STDs). If you don’t put them on all the time, you can get a shocking surprise.

Typically, people starting a new relationship don’t get tested. Their thoughts are not about STDs but rather about the flawless human being they are falling madly in love (or lust) with.

Also read: What is a condom: Exploring the Hero of Intimate Protection

What is the difference between STDs and STIs?

There are various terms used to describe issues that occur down there after intimate activity. STD and STI are virtually the same in the greater scheme of things for us non-medical types. The former is a “disease” while the latter is an “infection”. Not all sexually transmitted infections turn into diseases.

Back in the old days, this type of problem was referred to as “VD”, a venereal disease.

This will surprise you

You might have some form of an STD without even knowing it, as many symptoms are mild. In fact, recognizing the milder symptoms of herpes, chlamydia, gonorrhea or other common STDs is sometimes challenging

Acquiring basic knowledge empowers you to care for your sexual health.

Here’s something interesting: most STDs have similar symptoms, and only tests specify what you have.

Luckily for you, many of the most common sexually transmitted diseases are treatable, with the majority being cured by antibiotics. 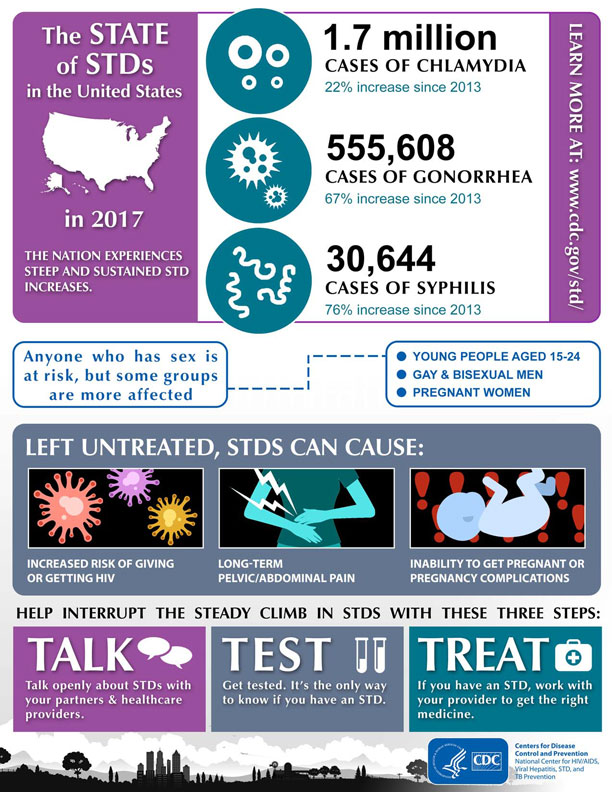 Almost every sexually active person has had a relationship with HPV at some point life.

Here's the good news. Most HPV types carry no symptoms, and the human body overpowers them on its own. The bad news is that some types infect the mouth, throat, penis and anus, and can even cause cancer in these areas. Several vaccines protect against these kinds of cancers.

Remember when we were talking about STIs vs. STDs? If HPV ends up causing cancer, it’s now an STD of sorts. No wants and STI or STD so it’s best to always use condoms when you engaging in carnal activities.

Chlamydia holds the champion trophy on the rank of the most common STDs in the United States. Its symptoms include burning pain during peeing and/or an unusual discharge from the penis or vagina. Doesn’t sound like something you want to deal with, right? If you use condoms, you probably won’t have to.

If for some reason you do find yourself with The Clap, the “good news” about chlamydia is that you can ask your doc for some antibiotics to clear it up. It’s curable.

Gonorrhea, also known as The Clap, symptoms are very similar to those of chlamydia: penis or vaginal discharge, burning during urination, etc. Interestingly enough, gonorrhea symptoms show most often in men. Better put, most dudes definitely know they have something… In comparison, only 20% of women know they have gonorrhea.

Fortunately, antibiotics come to the rescue once again for this bacterial STD.

So far we mentioned HPV, Chlamydia, and Gonorrhea. The next ones coming up are a bit more complicated.

The Syphilis infection is so gnarly it has four stages:

Stage #1: Appears as a harmless bump, cut or ingrown hair, typically where the infection first made contact. You can be in this stage for anywhere from a couple of weeks to up to about 3 months.

Stage #2: You may get a rash on your feet, hands or other areas, and may have other flu/cold-like symptoms. You could even start losing your hair. Although there are many symptoms, you still may not realize you have one of the most common STDs.

Stage #3: Symptoms often go away but you are still infected. This stage can last a long time, even years, before advancing to the next level.

Stage #4: This stage may cause blindness, deafness, mental illness or memory loss. You can even have heart disease or a stroke.

What’s also disturbing is that you can pass along Syphilis without even knowing you have it as it is most contagious in its early stages (#1 and #2). Yikes!

Note: Many STDs are like that; you can give them to someone without realizing you have a problem. Just another reason to be very careful.

If there is the slightest possibility you might have this Syphilis or any other STD, contact your doctor immediately and get checked out. If it turns out you test positive, ask your doctor for some antibiotics. Penicillin is the primary treatment for Syphilis but there are other medications available for anyone who is allergic to “The Pen”.

As you see, Syphilis is no joke. It’s better to always take precautions so you never have to worry about the possibility of getting this, or any other, STD. Wear condoms every time you have sex.

Herpes is another that is high on the list of the common STDs. Most people have heard about this one. It gets such a bad rap, probably because it’s so prevalent.

Herpes typically causes painful blisters around or inside the vulva, penis or anus during outbreaks. Symptoms for this one are unique to the individual, however. Sometimes you may feel like you are about to get a cold, and then wham, you have an outbreak. Or, you have a weird pain in your leg/hamstring before the blisters come.

Other symptoms may include: burning when you urinate, tingling in your genital area, etc.

But, not everyone experiences blisters or even any symptoms. In fact, guys often never even know they have this one, BUT, and this is very important…

Guys transmit herpes even if they don’t know they have it!

Unfortunately, the herpes virus is very easily transmitted. All that it takes is skin-to-skin contact. So you could even get this one on the outside, for example on your pubic bone area.

Nothing can completely eliminate your risk, but condoms are your most effective means of protection (98%).

In your body forever

Here's more icky news. You can’t cure the herpes virus. Once you have it, you have it in your body forever.

There is a glimmer of good news for anyone with this one… the longer the herpes virus is in your body, the fewer symptoms it shows. Of course, this is entirely individual, but generally speaking, it gets better with age (outbreaks subside, becoming less common).

There are also medications available you can take to limit virus outbreaks.

Please note, however, herpes can weaken your immune system or cause some weird things. Talk to you doctor and let them know any unusual symptoms.

HIV is the virus that causes AIDS. It's an acronym for Human Immunodeficiency Virus, and AIDS is an abbreviation for Acquired Immune Deficiency Syndrome.

HIV symptoms can feel like the flu along with fatigue, muscle ache or low fever. Weight drop and diarrhea are common signs too. It can take years for HIV to destroy a human's immune system to the point that the body loses the ability to deal with infections. As of today, there is no cure for HIV.

We’ve discussed the most common STDs. We wanted to also give honorable mention to “Crabs” because this is one that many people have heard of even if they don’t really know what it refers to. Crabs are the nickname for pubic lice.

You might remember the “lice check” in elementary school. Kids got their heads examined to see if they had lice in their hair. Well, you can get the same type of thing down in your pubes… It seems lice like hair, no matter what kind.

Lice are always quite contagious. So make sure you keep yourself protected by insisting on condoms.

Whether the case is HPV, Chlamydia, Gonorrhea, Syphilis, Herpes or HIV/AIDS, a simple blood or saliva test determines your status. Get tested for STDs regularly to know your situation. How often is up to you but should coincide with the possible risks you take, e.g. the number of your sexual partners and the frequency of your encounters.

Also read: This Is Where to Buy Condoms Today, Tomorrow and Every Time

You can pass along an STD even if you don’t know you have it, and you can get one even if you don’t notice anything peculiar about your partner. As we discussed, condoms are your best bet because they are effective in helping to prevent STDs.

Remember, the risk is never eliminated entirely. It's important to mention that lambskin condoms do not protect against STDs. Read more about them in the article we wrote about these unique condoms.

However, by using a condom every time you have intercourse, you drastically lower your chances of being infected.

Be aware of your sexual health. It's your life (and your partner’s) so don't take chances… use condoms.

Note: Be aware that spermicide condoms do not add any extra layer of protection against STDs.

Educate yourself even further regarding the most common STDs. There’s more to know than what we covered in this article. There are many reputable medical sources you can visit on the Internet, and you can always talk to your doctor.

It might sound cliche, but knowledge keeps you from altering your sexual life, which could even impact your entire life.

Get more data and statistics straight from the official government source at  Centers for Diseases Control and Prevention website.