How to put on a condom is not exactly a puzzling process, mostly because rubbers are rather simple when it comes to inventions.

In case you are wondering if there is a wrong way of putting on a condom, the answer is yes.

Remember that what you do when suiting up makes a difference  in terms of condom effectiveness.

Here’s a tip for first-time users who might be a bit nervous about acing how to put a condom on. Do a few practice drills before doing the real thing.

Before we get into the step-by-step instructions of how to put on a condom, we need to emphasize a few things.

This is something important to remember. You might think that you only need protection upon penetration. This is mostly true if you are only concerned about pregnancy, but it’s still not advisable.

To fully protect yourself, which includes thwarting sperm’s official mission AND preventing the transmission of any common STDs, you need to don a rubber before ANY intimate activity begins.

"there is a wrong way of putting on a condom"

STDs aren’t just found on the inside of your partner; sometimes they reside on the surface. You might notice something suspicious, but not necessarily. If an “issue” is minuscule or you are completely in the throes of passion, you could miss, or dismiss, that tiny bump, rash or sore.

The easiest advice to follow is to always put on a condom before the fun starts.

Use a new condom every time

Condoms are not reusable so make sure to have, and use, a new one for every occasion. There are just too many variables when it comes to washing or cleaning that could damage the material. So…

We can’t reiterate this enough: reusing is wrong on several levels. Don’t even think about it.

Though condom shelf life is relatively long, checking the expiration date is a good idea. If you store the condoms at an average room temperature, they should be fine to use throughout their whole lifetime. Once they expire, buy some new ones and trash the old. 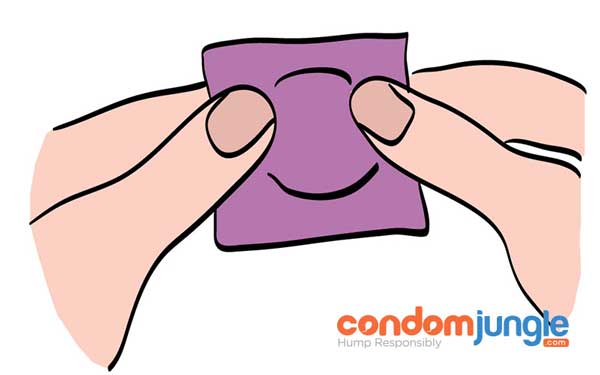 Where you store your protection matters. If you think a heat wave or its opposite blasted your stash, it’s best not to take any chances. Get some new ones because prolonged extreme temperature fluctuations can affect the material and therefore your level of protection.

Every condom wrapper has an area meant for an opening. Though this varies per manufacturer, it's usually visibly marked by a dotted line or something similar along the edge. If this is not the case, look for the two opposite jagged sides as those connect the wrapper when still in a strip.

When you are opening one in the heat of the moment make sure you are not opening it on the “wrong” side since those are nearly impossible to tear.

We find the best technique is to: 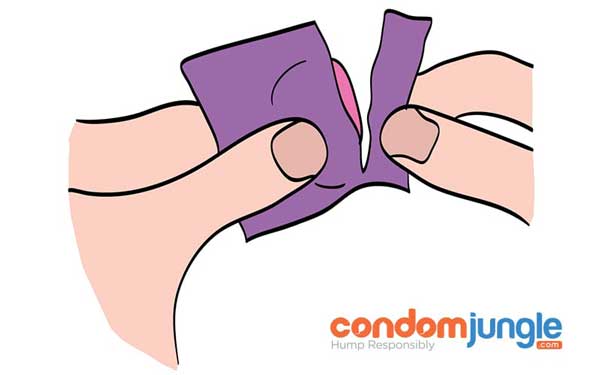 FYI: You could have some challenge opening it if your fingers are wet since the wrapper’s foil material tends to be a bit slippery under those conditions. To avoid any interruptions consider using the following tip:

You can then just grab it when the time comes and put it on without having to bother with opening or anything else. If you have your rubber ready, you won’t be scrambling for a condom, and meanwhile, possibly lose your erection. No delays and no interruptions.

You might think that the timeframe between opening the wrapper and putting on the condom (which could only be at most minutes, right?) would make the condom’s lubricant dry out.

Regardless of the lubricant type (water or silicone), the condom stays in its unrolled form and still inside the wrapper. Therefore most of the lube is not exposed and is about the same as before you opened the package.

Alright, now that we covered all that, it’s time to get down to the nitty-gritty and discuss the appropriate way of dressing the pecker.

How to put on a condom?

Once the penis is erect follow these three simple steps: 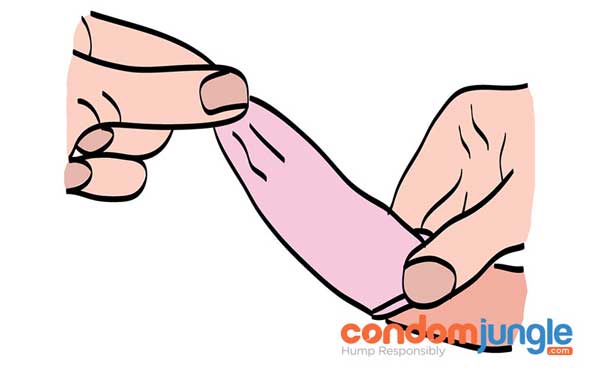 Those are the basics that haven't changed  in the modern condom history. For anyone who likes a lot of details, read on for a bit more explanation regarding each step in the process.

Whether or not the condom you have has a reservoir tip, gently squeeze the top part between your two fingers to remove the excess air. You don't want to have an air pocket on top of your penis. That would not only feel less than great for you but it could also make the condom break.

When placing the condom on the head of the penis make sure it's with the unrolled side out not vice versa.

Tip: You can put a few drops of compatible lubricant inside the unrolled condom.

Why do we recommend this?

The vast majority of condoms feature lubricant on the outside but not on the inside. Putting a few drops of a compatible lube inside before unrolling will make your penis move easier and therefore feel better.

When unrolling the condom, pull it all the way to your penis’ base. If for any reason it doesn't unroll easily make sure it's not backward as we described previously.

Other reasons that cause a bit of difficulty during the unrolling portion include:

In any case, if unrolling becomes an issue, throw that condom away and use a new one.

After you ejaculate, the penis gets softer, losing its erection rather quickly. Make sure to hold the base of the condom in place while pulling out of the vagina. Remove the condom and avoid spilling semen. 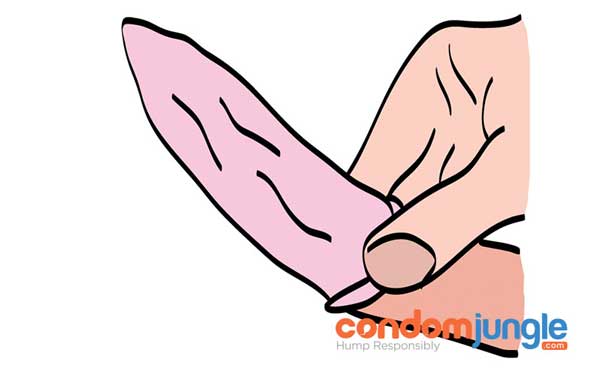 Now that the fun part is over, it's time for cleaning up.

Wrap the used condom in tissue (toilet paper) and throw it into the trash. Wash your hands with lukewarm to fairly hot water and soap. 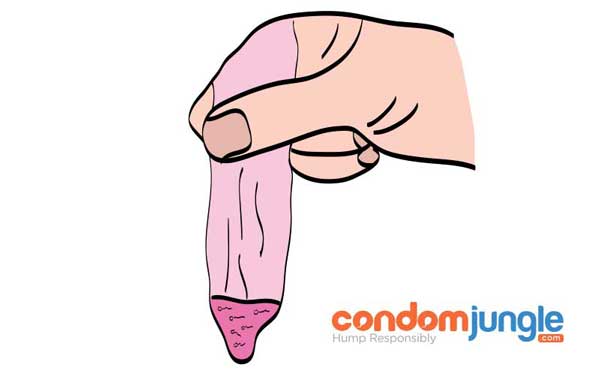 How to put on a condom FAQs

Can You Flush Your Used Condom?

You should never flush prophylactics down the toilet. It could potentially clog the sewage system. The condom’s material doesn’t dissolve the way toilet paper or human excrements do.

Should you wash after having sex?

Ideally, you should avoid any further sexual contact with your partner before washing your private parts or any other areas that could come into contact with body fluids.

You see, how to put on a condom is pretty easy. We hope you have lots of occasions to do it right.

Here's a PDF of our instructions on how to put on a condom.

What is a condom: Exploring the Hero of Intimate Protection

13 Types of Condoms for Your Ultimate Fun Time