Condom Anatomy From Top to Bottom and Everything In Between

Condoms aren’t exactly the most sophisticated of inventions. Basically, they’re a form-fitting material designed to capture a substance during the most primal of all activities. Simple enough, right? In this article we dig down to the actual condom anatomy, taking it from the bottom to the top. 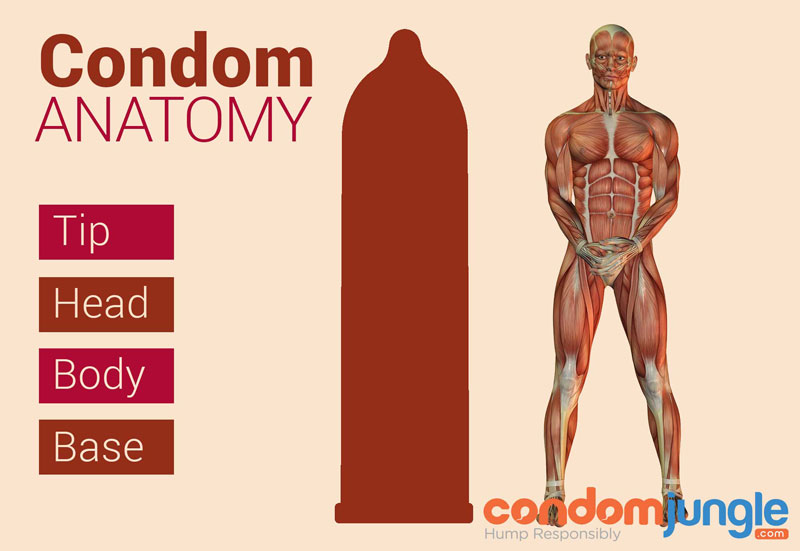 Plenty has changed throughout their long history.

When you think of a condom you probably see something similar to the image below. It’s pretty straightforward. However, there are different areas of a prophylactic to explore, and some can even make sex better.

We break down a condom into four parts. OK, we know using the words “condom” and “break” in one sentence is not an ideal combination but it just came out that way. For the record, condoms are extremely effective.

We should also mention that knowing about condom anatomy doesn’t make you a better lover directly, but it helps you understand what you are wearing a bit more.

These semen-capturing devices, believe it or not, have four distinct areas:

The base is the part of the prophylactic that is very much the same across all condoms regardless of their shape, material, type or brand. The base may be thinner or thicker, smaller or larger, but they all look alike. This part of the condom anatomy is the thin ring that the condom is rolled onto. You see this part clearly when you remove it from its wrapper.

The base serves an essential role for every condom-- to hold it in place, preventing it from possibly slipping and sliding off. Believe it or not, this small area has a lot to do with whether you'll like a particular condom, or not.

Yes, these safer-sex sheaths stretch but that doesn’t mean that each one stretches to fit all men. That's not what we are saying…at all.

Let us explain. There is a comfortable range in which the condom base stretches without you feeling any strain or tightness, which could translate to possible discomfort and a possible loss of erection.

When you try a condom and it doesn’t feel 100% right, or at least pretty darn good, it might mean you need a larger or smaller rubber, but not necessarily. It could just indicate that you need to try a different condom type, or better yet, a different brand.

Why a different brand?

The reason is simple. Manufacturers have their “secret” recipes as to how to make their material so it feels soft and pleasant to the touch. It is entirely possible you might not like a particular brand, but you'll like another.

Thanks to the condom material’s elastic characteristics and considering how soft some condoms are, a single size can go -/+2mm or even more.

Remember that there are four size categories -- small, regular, large and extra large – and the base is what is most different. These four options typically satisfy the vast majority of men.

So our advice to you is to try different brands and sizes because that is how you’ll find what works for you.

The condom body goes from the base, which we just discussed, up the length of the shaft. The condom body is the place where manufacturers can really go for it in terms of design enhancements. Get one with raised texture such as studs or ribbing around this area if you want to heighten your partner’s pleasure.

The condom head is where the other head goes. Your penis head, that is. This head is also called a man's second brain because it sometimes takes over and makes all the decisions.

With all seriousness, this part of a condom also plays an essential role because the head of a penis has the most nerve endings, making it quite sensitive. It is certain that what's going on up and around the head area subsequently shows on your pleasure barometer.

Although the body is the length of the condom, the head is a subset, if you will, of the body. This head is either the same width as the base or it’s wider, depending on the condom’s shape. Said another way, some are the same width from end to end while others have a tapered shape. These latter varieties, with a wider head, feel more comfortable for men who are a bit thicker towards the head, which is why this type of prophylactic increases sensations. Your head has more freedom.

So far we went over the condom base, body, and head. The last part to talk about is the top.

The top is perhaps the most recognizable condom feature. Remember the little tip at the end? You might also recognize this part if we use the term that manufacturers typically put on their product boxes -- the ‘reservoir end’.

What’s the purpose of the tip?

These are two official roles, but there is another. You can use this area, the tip, for:

Basically, you just hold the tip with your thumb and index finger in one hand while rolling the condom down with the other.

As you can gather, this is a pretty cool part of the condom anatomy.

As a side note, in recent years, we’ve seen the development of a new line of condoms that do not have this classic, and some think, essential, part. These prophylactics are sort of like a weird looking, narrow light bulb. This line of Trojan condoms, named Ecstasy, has gained in popularity and has some happy users.

So there you have it. We told you that there is a bit more to condoms than it seems. Their essential role is to protect against STDs and unwanted pregnancies. Condom shapes, on the other hand, are all about increasing comfort and pleasure.

Brands think about every aspect of the condom anatomy when researching, designing and testing their products. And they do it all for you.