Can I Reuse a Condom if I Wash it?

Can I reuse a condom if I wash it? That is the type of question that you are embarrassed to ask and wonder if you are weird for even thinking it. Don't feel bad. You are not the only person who’s thought about the possibility. 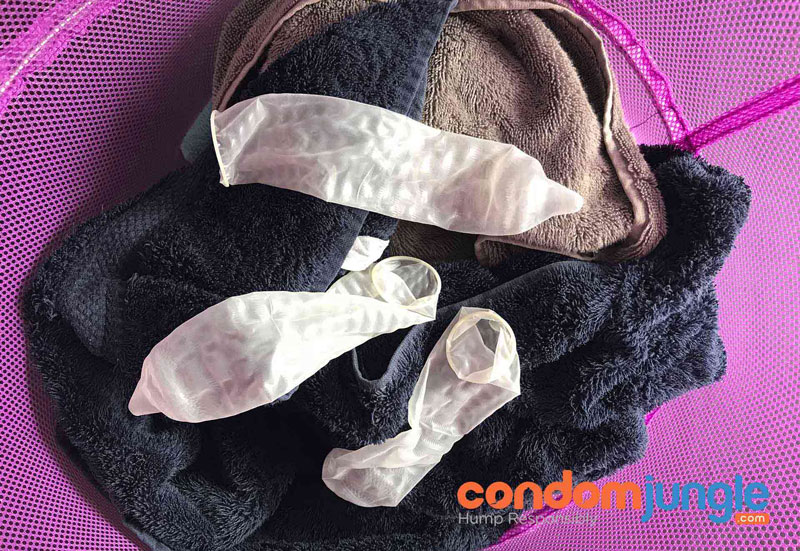 We can kind of understand how some would wonder about this, especially if you are new to condoms and just learning about such stuff. If you are of a nature lover, and as a generation, we all are much more environmentally conscious, recycling and reusing stuff goes along with that. And some of us always like to save a penny here or there, like washing out plastic zip sandwich/snack bag.

I’m sure for all of us, it seems plausible that you -could- wash a rubber…

Can I reuse a condom?

We’re going to tell you like it is. No!

Condoms are just not reusable. Plain and simple.

If you are still with us after we gave you the short answer, let's continue. We will get more into why condoms are not reusable, as there are a bunch of good reasons why you should not, ever.

If you are new to this whole sex thing, you might not know all, or any, of the nicknames for doing IT or for the medical device that protects you. Once in a while, you might hear someone refer to the latter as a love sock. This type of sock and the more traditional variety covers one of your limbs and protect the said body part. You clean your socks, right?

Perhaps in a washing machine

Ok, let's go with this crazy idea and pretend for a moment that we intend to reuse condoms after washing them. My head is spinning right now imagining how the process of dirty laundry (condoms) in reality would work. Would you keep them in a condom hamper until there is enough "laundry" for a small load? (pun intended). Where would we keep the "clean" ones since we have no wrappers?

I'm seriously having a hard time getting through writing this part without getting nauseous and laughing at the same time. But I’m here to help you and I intend to explain why you shouldn’t wash them, but first…

How would you wash a condom?

Would you just wash them by hand if you only have a single condom and you want to go for a second round? Perhaps you stick it in your washing machine? (I know, another pun, and yeah, also intended). What about the washing cycle? Should you choose delicate, rapid wash or permanent press with wrinkle control? Do you need to use heavy duty for those that are very dirty and have been already used several times and have some miles on them?

There are so many questions you can ask about this condom reusing and washing situation. What kind of laundry detergent would you need to use? Should you use bleach to have them nicely whitened or just something so they are soft to the touch?

ALSO READ: How Effective are Condoms at Protecting Your Private Parts?

And we should not forget about the drying process. Should you let them dry naturally hanging on the balcony secured with clothespins or use the drying machine’s cold cycle?

These are all valid questions if you –were- to wash anything, including prophylactics.

Of course, technically you can “wash” a condom. Washing something merely means using some sort of cleanser like soap and water on an item. That’s in theory.

Ok, enough of the fantasies and joking around.

Even though there was a time in history when people did wash and reuse their condoms, let's go over some common sense reasons NOT to.

Reasons why not to reuse a condom

The FDA categorizes condoms as a medical device. The manufacturing process happens in a clean and sterile environment wherein the last part, the condom is sealed in an airtight wrapper.

You might not do a great job at washing them, which could cause a pesky infection. Also, not all cleansers are compatible for down there.

Though they are made of a strong material washing could damage or weaken them, especially in the way you handle them. There are too many variables that could make the condoms break more easily, thus decreasing the effectiveness and subsequently.

Condoms are inexpensive, but I know, if you are a student on a tight budget you could buy another pack of ramen for the same cost. Look for high school or college health department programs for free condoms to help you out. If you are an adult, you should find space in your budget for something as important as condoms.

If you buy condoms online, you usually save in comparison to buying them offline. You can also look for additional coupon and discount codes to save even more.

Do you remember how your condom looked when you took it out of the wrapper? It was rolled into a neat looking, fresh product. They are rolled that way for a reason to help you put them on. If you are curious and want to learn more, check out our how to put on a condom article. If you were to use, wash and reuse, it might be harder for you to put it on because it’s not in its original, primed and ready to roll position. Then later when you have trouble putting it on, you may say "Screw it", and not wear it and that’s bad.

As you see as we get closer to the end of this article, the dumber the idea of reusing a condom seems to be.

Considering all the risks you would be taking after washing and drying (hygiene, damage, ineffectiveness), forget about asking yourself, "Can I reuse a condom?" Definitely pass on that and use a brand new “sock” every time.

Who likes to do laundry anyway, right?

As bad as it would be to reuse a condom after washing it, don’t even get me started on reusing a condom without washing it. Yuck! This should go without saying, but NO. NEVER. DON’T. EVER. DO IT.