As the world celebrates the Earth Day annually on April 22, we recognize that condoms and Earth Day are a good pairing. 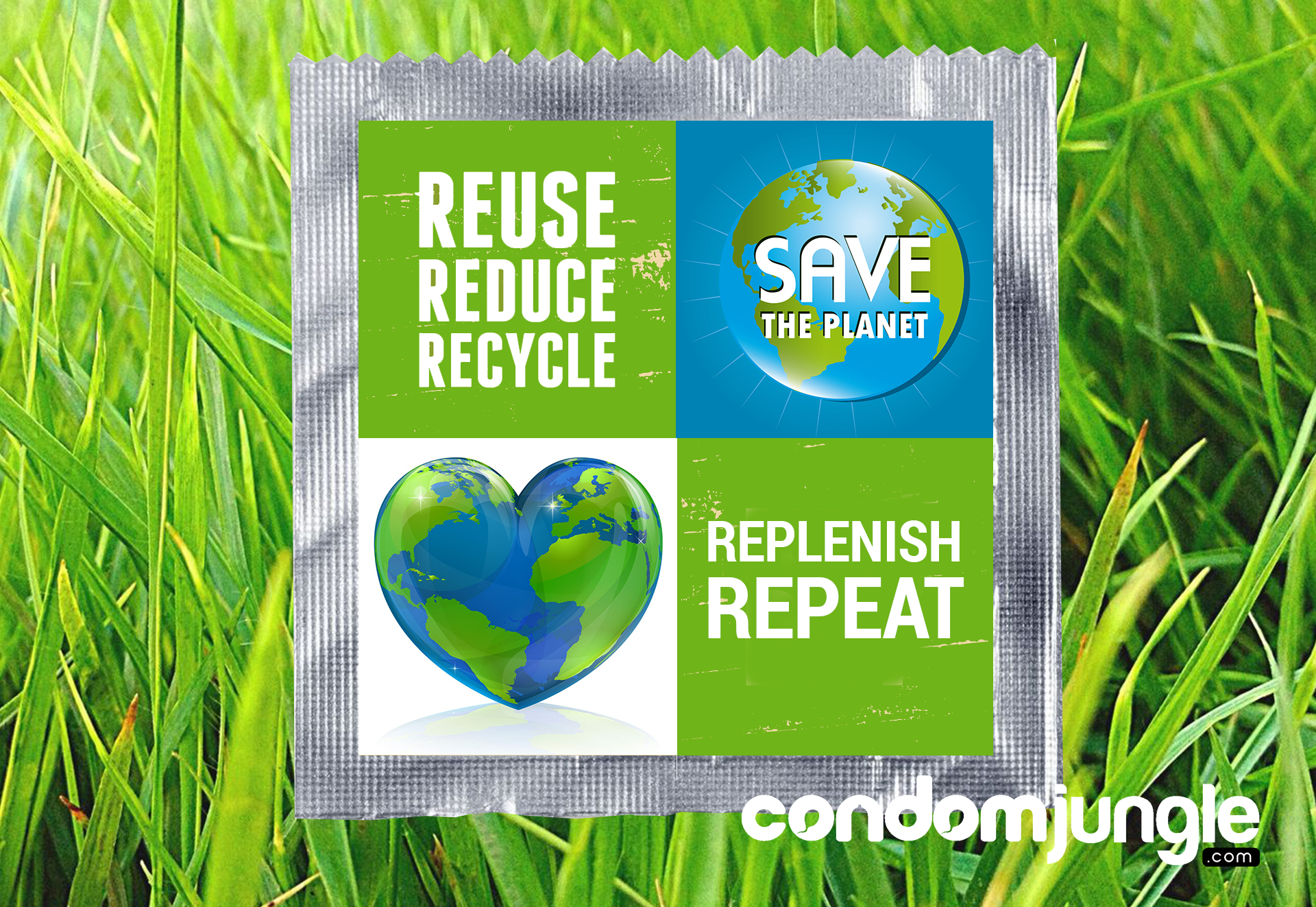 Earth Day increases awareness of issues relating to our natural environment. There is nothing more natural than sex. Just like we need to save the planet, we need to protect our loins.

One of the most well­ known Earth Day mantras is undoubtedly Reduce, Reuse, Recycle. Here’s how that sentiment relates to sex and one of our favorite items of all time — condoms, of course.

Condoms are the best way to reduce your risk of catching a sexually transmitted disease. No one wants an STD, and not having one reduces your carbon footprint because you don’t need a prescription which comes in a plastic bottle.

They have to manufacture the plastic and if you don’t recycle that bottle... Double whammy. On the flip side, if you somehow managed unfortunately to get something like herpes, which is incurable, rubbers also reduce your risk of giving someone your issue.

Perhaps most significant, condoms are the most fantastic way to control the world’s population. If you don’t want kids, or don’t want 10, don a condom. If every couple had two kids, the population would remain constant. But some don’t have any, while others have 19 and counting! You know who we’re talking about.

Rubbers are a way to even out the playing field for anyone who is super fertile but doesn’t want kids. Or, you might want children, but you are not ready yet. Whatever the case might be you use condoms to take control.

OK, when it comes to condoms, this one is just the opposite. As much as you might think you are kind to the environment by reusing a rubber, you should never reuse condoms!

It might have been a "thing" back in history when condoms cost a week’s average salary, but not today. We can’t repeat this one enough. Reusing condoms doesn’t do you any favors. Once you put the rubber on your tree trunk, that’s it. The latex could be weakened, you could damage the prophylactic when you take it off — there are so many ways that a condom can be compromised during regular use. Who wants to take that kind of chance?

Using a new one every time is the only way you can ensure you’ll get the highest condom effectiveness possible, and if you don’t want kids or an STD, this matters a lot.

Hmm... If you can’t reuse, then you probably can’t recycle either, right? Correct, but we got a little creative with this. Try many different rubbers — from warming and ribbed to climax­ control condoms — then “recycle” the condom types that you like the most.

Why should we stop here? Let’s add to this Eco-­friendly mantra.

When using a condom, it’s wise to use some lube and replenish as needed. Just like it sucks when a state like California experiences a drought from time to time, if you are dry down there, it isn't right when you are fornicating. Keep lubing up. Wet is better on this occasion.

The best addition to an Earth Day mantra is Repeat! Have sex with a condom and repeat that activity often. Having more sex makes you feel better and improves your outlook on life. That certainly benefits our planet. So buy condoms online, use them and repeat.

Whichever way you decide to celebrate the Earth Day, remember that condoms are up for a party anytime you are. They won't flake on you as long as you keep them by your side when you need them.