17 Simple Condom Facts Everyone Should Know

You may think you know nothing about prophylactics, but we bet you know the most notable of condom facts (i.e. the main reasons why anyone uses them in the first place). 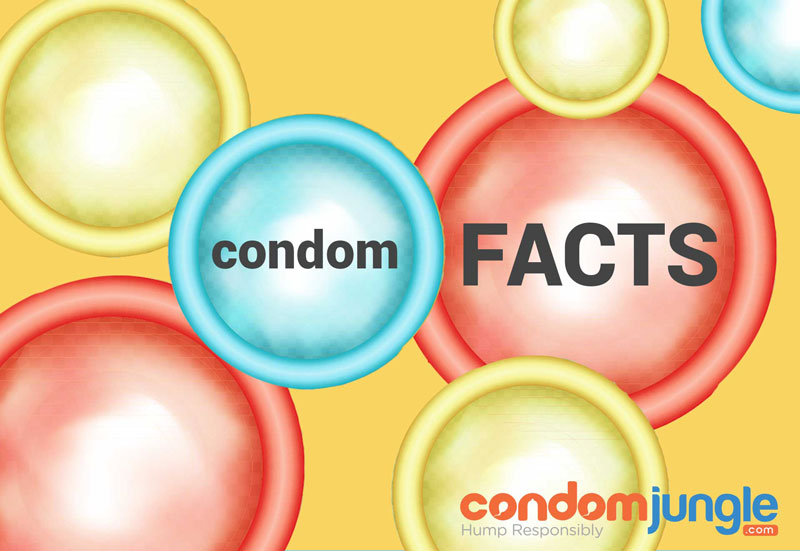 There are myths and truths out there, so we’re here to give you some of the basic condom facts to demonstrate that there is more to this simple invention than you might think.

If you think about the history of condoms (yes, they’ve been around a long time), the initial and main intention for their use was and still is, to prevent a woman from getting pregnant.

Using condoms is really the only thing that you can do (besides not doing it) to help prevent you from common STIs. Depending on the type (herpes, chlamydia, HIV, etc.), STIs have a range of symptoms from itching to burning or way worse.

Covering your genitals with a protective sheath is the best way to keep your private parts, and those of your partner, healthy and free from any nasty infections. In fact, condom effectiveness is very high when you use them properly and every time you engage in any sort of sexual activity. If you don’t wear them religiously, they can’t help you. That is a condom fact you should always remember.

Fact #3: Condoms have an expiration date

Typically, the shelf life of condoms is up to 5 years but it may vary based on the material and type of lubrication. The expiration date is always stamped on the package and the wrapper so you never have to, just make sure to do a quick check.

The main reason there is a time when you should toss your rubbers is due to the quality of the material used in the product. If you keep them too long, the material deteriorates and is more prone to breakage. If that becomes the case they may not protect you like you think they will. Manufacturers stand by a certain amount of time that their condoms will last. After that, you never know. So make sure to store your condoms properly, and throw them out when the packaging says to do so.

Men are not all the same, and neither are condoms. Of course, rubbers are stretchy and the standard ones accommodate most men, but a few sizes are needed for a better fit. For this reason, there are small, standard, large and extra large condoms.

The smallest are sometimes referred to as snugger fit. On the opposite end of the scale, a brand like Trojan came out with a whole product line called Magnum that is dedicated to “bigger men”. Whatever your penis size, these four condom sizes typically work very well.

It’s good to spice things up a bit, and the same holds true when selecting your rubbers. One of the best condom facts is that there is some diversity available. Granted, the main purpose is safety, but variety is always appreciated.

Try a bunch to find your favorites. Don’t be afraid to mix it up from time to time with different types. One night you’re studded, and the next you are glowing to make things more titillating.

Fact #6: Condoms are not just made of rubber latex

The vast majority of condoms are made out of latex, and most guys and their partners have no problems using them. But for those who do have an issue, like an allergic reaction, there are alternatives.

The good news is that all condoms function exactly the same. They create a barrier preventing semen and other bodily fluids from transferring from one human to another.

The only difference is that the natural condoms, like the ones made out of lambskin, only help with unwanted pregnancy. So this type of condom is best for couples in a monogamous relationship.

If you haven’t had sex yet, we recommend using latex condoms first. However, if you know for sure that you have an allergy to this material or think you may have an issue with them, then you try a non latex kind.

Among all the condom facts this number seven is very proclaimed. Besides abstinence, condoms are the only way to protect yourself from contracting a sexually transmitted disease, including HIV. Considering their cost, ease of use and availability, there is no reason NOT to use a condom. If you are already HIV positive, protect your partner by being as safe as possible.

Fact #8: Condoms have no hormonal side effects

The invention of The Pill allowed women to take care of birth control themselves, and women are fairly reliable about such precautions. Men, on the other hand, sometimes complain that they don’t like wearing condoms because they are too tight or because they just don’t feel good.

Because The Pill affects a woman’s cycle, there can be hormonal side effects. Some females enjoy good side effects like better skin, bigger boobs and less painful times of the month. There are other women that have such severe side effects, like breast tenderness and gnarly mood swings.

Even the lucky ones, who seemingly don’t experience any problems, may have issues with long-term use. In fact, the side effects, like with many medications, can cause serious issues such as higher blood pressure, and a greater chance of heart attack, stroke, and cancer. Yikes.

Condoms are a much better option because there are simply no hormonal side effects, and really, no side effects at all unless you have a latex allergy, and then there're alternative prophylactics for that.

Never forget that condoms help prevent pregnancy -and- sexually transmitted diseases. The Pill only helps with the former.

Fact #9: Some condoms are colorful

If you want to spice up your love life, colored condoms add a visual element that you may have never experienced before.

How can a prophylactic help extend your pleasure?

There is a special lubricant that’s made with an ingredient called Benzocaine that numbs your penis.

OK, we know that sounds counter-intuitive but stay with us.

For guys who have a problem with premature ejaculation, these prophylactics have a special lube on the inside that delays climax long enough so sex is exciting for -both- partners.

Fact #11: Some condoms stimulate you during sex

With the exception of the female condom, which sort of never caught on, there are some condoms that are actually designed to make a woman enjoy sex even more. Condoms with ribs, studs or combination of both textures increase stimulation.

So buy textured condoms yourself, or ask your man to get these.

How much do you value sex?

If you want to do the deed, then you should be able to afford to keep yourself (and your partner) protected.

Condoms are the best, and most economical way, to keep your body safe. They literally cost like maybe a dollar per intimate encounter. That’s very reasonable considering the benefits they offer. They keep you from having children before you are ready and they also keep your private parts untarnished.

Fact #13: Condoms are easy to carry

There is no excuse why you shouldn’t always have a condom with you. They are small a neatly sealed in a wrapper. They are inexpensive. Plus, they fit in your pocket or purse. (Hint: just don’t keep them next to where you put your keys)

Fact #14: Women make almost half of the condom purchases

There are certain types of products that are almost exclusively gender-specific, and you might think that men dominate when it comes prophylactics purchases.

It turns out that women are just as likely to buy condoms as men. That’s like 50-50. Women want to protect themselves and many know that not all men carry the important stuff.

Some men don’t particularly prefer using rubbers, and so they try to get out of wearing one by saying they don’t have one. If a woman has a stock, her dude is more likely to wear one.

So ladies, buy condoms online so you always have one for your guy to use.

You don’t have to be a rocket scientist, or even a sex therapist, to know how to use condoms. How to put on a condom is super easy. All you have to do is be ready, and you know what we mean by that (be hard and in the mood). Just open the wrapper (don’t use teeth or other sharp objects), take the condom out and roll it onto your erect penis. That’s pretty much it!

Fact #16: You can buy condoms without a doctor's prescription

Condoms are typically classified as a health and beauty product, but in essence, they are a ‘medical device’. They prevent a medical condition (pregnancy) and diseases (e.g. a variety of STDs like gonorrhea, crabs, syphilis, etc.). Despite being medically related, the good news is, you don’t need a doctor’s medical prescription. You can buy them right over the counter.

Manufacturers test their products electronically, some even triple test, to ensure the highest quality possible.

So there you have it. A bunch of condom facts just for you.

Is there something we didn’t hit on that you are curious about? Let us know so we can give you all the details you want.

We have no doubts that you knew at least some of the condom facts mentioned in this article. If you didn't, we hope you'll use them now to your advantage and make condoms to work for you next time you use them.