Are you familiar with Trojan Bare Skin condoms? We know that not everyone is on a first name basis with his condoms, so let us back up a bit. 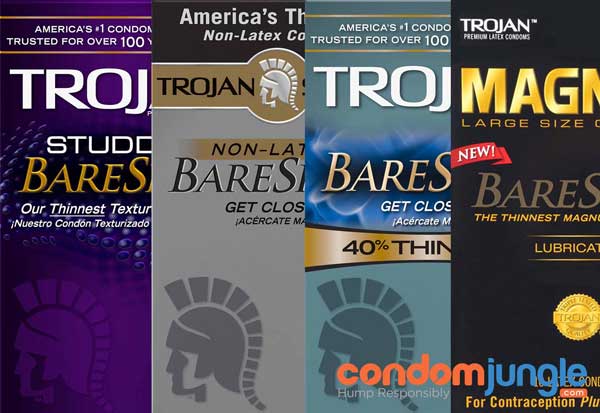 When it comes to naming a condom, brands get creative. For a product as personal as condoms are, the product name should evoke a feeling. Aside from that, it’s great when the moniker also describes what's inside the box or the wrapper.

Trojan hit it on the head with the name Bare Skin. It makes you feel what everybody demands from a condom. The name actually gives the feeling of being close to your partner. So close it feels like there would be no condom at all.

When Trojan Bare Skin first came out, you might have heard about it through ads running on television and the Internet.

The product’s video ad goes something like this. It's dark outside, and a young couple's car pulls into a supermarket parking lot to buy more condoms. They both race inside the store because they just had amazing sex using a condom that blew their minds.

From a shelf stocked top to bottom with only Trojan Condoms, they grab the retail box and go to the counter. Pointing to their box, they ask the cashier, "What is this you sold us?"

The cashier: "Well, it's Trojan BareSkin."

The ad continues about how it's 40% thinner... We talk about the individual specifications later in the article, and you can watch the Trojan Bare Skin video ad below.

Many guys shop with their eyes, looking at the product box colors without giving too much thought to the exact product name.

We’ve taken orders over the phone from our CondomJungle customers for years, and they don't always remember the whole product name.

Guys often refer to a product by the color of the retail box or by its brand or type, like ribbed or thin.

Like we said, Trojan Bare Skin got it right with a pretty cool name for a condom that guys remember.

We’ve talked a lot about the name. Now it’s time to dive deeper. Quickly, if you like using the thinnest condom, this product is especially for you.

Trojan Bare Skin is a line of ultra-thin condoms. That alone wouldn't be anything groundbreaking since there are many of this kind out there on the market.

What's particular about Bare Skin is that it's 40% thinner than other standard condoms that Trojan makes.

Do we have your attention now? Yes, this one is even thinner than their longtime favorite, the original Trojan Ultra Thin.

We also want to let you know that there are several types of Bare Skin condoms and we look at them separately a bit later.

Before we do that, let's address what concerns many users, especially younger ones have, and that is the ever-present fear of condom breakage. That fear comes from not having enough knowledge so let's shine some light on this concern.

For everyone who worries and asks those kinds of questions, we have a soothing answer for you. Condoms typically don't just randomly break. It’s good to know what contributes to such a rare occasion. Feel free to read our article we wrote some time ago that outlines some of the most common reasons why condoms break.

So the short answer is No, Trojan BareSkin doesn't break. If they were prone to breakage, they would not be available on the market.

Before the condom leaves the factory, it undergoes a rigorous testing process. The FDA supervises condom quality in the United States so you know you are getting reliable products. That is, of course, if you use brands that carry this official certification. You don’t have to worry about that with Trojan.

As stated the main feature of Bare Skin is its thinness. These thin condoms are also available in a studded, non latex and large size version.

BareSkin is a premium natural rubber latex condom. It's stretchy without the uncomfortable constraint of some rubbers. It’s also soft and feels nice on the skin.

The Supra BareSkin, on the other hand, is made of polyurethane, which is not as stretchy as regular, natural rubber latex. Supra’s base doesn't expand as much as latex does when you put it on over the head of the penis. This is why, even though the condom base size is slightly wider, it's still a standard size condom.

There are three condom shapes available. Scroll down to see the images for individual product shapes, which show you the main differences.

It's safe to say that BareSkin fits regular size men while the Magnum version is more suitable for larger men. The material is soft and stretches enough without constraining that even extra large men should be fine.

Click the "More Details" button next to the products below to go to the particular product page.

First, we look at the "original" Bare Skin condom that wowed users by being thinner than other standard Trojan Condoms.

We stated a couple of times throughout this article that this condom is 40% thinner than its Trojan counterparts. Available in a straight wall shape, this condom’s color is translucent and light and it has almost no odor.

Trojan Studded BareSkin is Trojan’s thinnest condom with elevated studs all over its textured body for heightened sensitivity.

Trojan Magnum BareSkin is a large, lightbulb-shaped condom for the bigger guys.

The BareSkin feature was added to Trojan Supra when the brand created the BareSkin product line several years ago. As we already previously mentioned, this one is a non latex condom made of medical grade polyurethane.

The cost of Trojan Bare Skin is similar to any other latex condoms, varying slightly depending on the seller. If you buy offline, you usually pay a premium price.

To check our current price and the available quantity discounts scroll right above in this article and click the "More Details" links.

Though we do not provide free samples without a purchase, you can score free condoms when shopping at CondomJungle. How do you do that? Check out the four products above for current offers.

Trojan released the original Bare Skin condom several years ago. As mentioned, now there are another three condoms in this product line.

If you want to read our customers reviews, follow the link below the products and head to their particular product page.

You can also leave your own condom review if you are eager to write a product review essay for on condoms.

Trojan Bare Skin is a condom that impresses most everyone with its thin and get-close feel. Have you tried this one yet? If not, give Bare Skin condoms a try and see for yourself how thin it is. Don't forget to check out other exciting condoms like Trojan Ecstasy. There is never enough pleasure. In any case Hump Responsibly®.