Ultra Thin Condoms Are a Win-Win for Both Participants

Ultra Thin condoms could undoubtedly be given the title of the most popular prophylactics out there. Men love using them, and women certainly don’t mind their men using them. So it seems like a win-win for both participating parties in their most human intimate activities. 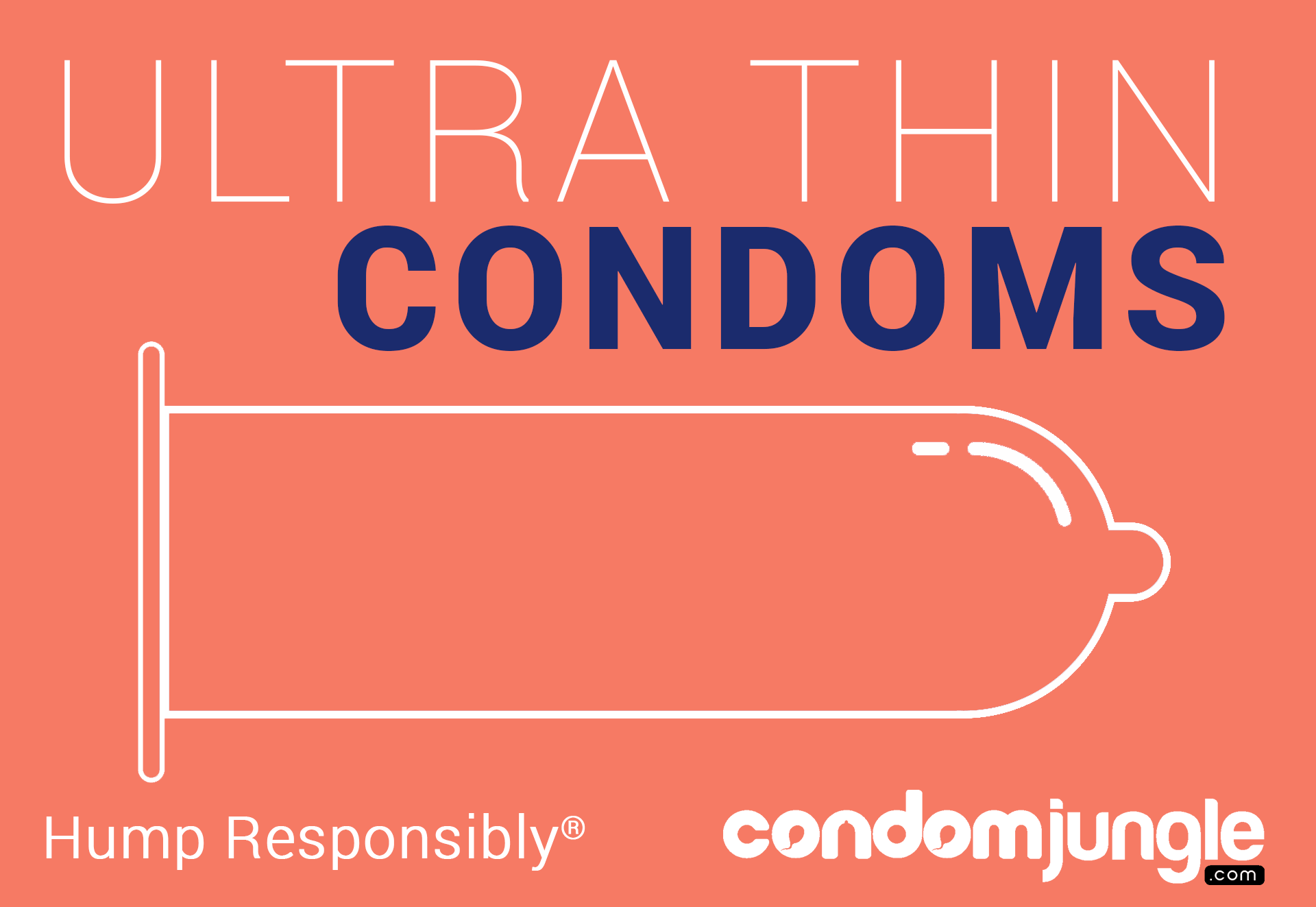 In this article, we shine some light on the always-cherished ultra thin condoms. Join us as we explore this ultra-thin layer otherwise known as a man's protection sheath.

Regardless of your favorite condom, the bottom line is that you want an intense and safer experience at the same time. Ultra-thin condoms are here to help with both.

We throw the word "safer" in the mix to reiterate the ultra-importance of protecting yourself against STDs and beyond. If you are less than exclusive, use condoms. It’s as simple as that.

No matter where you are in life, you might not be ready to have babies and start a family just yet. Regardless of your reasons, ultra-thin condoms give you the prevention you demand from the condom you wear. Let's highlight the word "wear" we just used.

There's only a single demand any prophylactics ask of you, and that is to put a condom on every time. That's when the effectiveness (you guessed it), is at it's highest level.

How is that for a groundbreaking revelation?

We know you heard it many times before so we apologize for sounding like your mom but please, be careful and safe out there.

What are ultra-thin condoms?

If you are generally averse to using rubbers, ultra thin condoms could spark your interest. Ultra-thin condoms are the types of condoms that are thinner than the rest, and regular versions aren’t exactly “thick”. That is the most general and straightforward answer we can give you. They may vary slightly in thickness brand by brand, but overall, being thinner and therefore more sensitive is their unique characteristic.

Condom manufacturers use the metric system in their production process, so we use it as well. The thickness, or better yet thinness, of the ultra-thin condoms is something that varies across the brands. On average it's around 0.05 millimeters.

Let us make the following statement right off the bat. We are not going to go into the technicalities of exact measurement down to the tenths of millimeters in this article for two reasons.

First, we believe that as a user, you don't even recognize the condom thickness just by wearing it (for condoms in this specific group). That's why the thinness at some point is irrelevant if it's not paired with an excellent feeling material.

We want to give every brand a chance to impress you by the overall quality of their product rather than just a number. Hope it makes a bit of sense to you.

We believe that making ultra-thin condoms is not a competition among brands about who can make the thinnest sheath. It's instead a quest for the best feeling condom.

Imagine we gave you unmarked condoms and told you to try them all. A week later we would meet, and we’d ask you to rank them by how you think they are. We bet that you would not be able to do the correct ranking.

As we mentioned, thickness as well as how the material feels on your member defines how good an ultra-thin condom really is. Be your own judge since you and only you can tell what feels right for you.

The second reason is that in the majority of cases, brands do not disclose the material thickness of their condoms. At least, this stat is not on the retail boxes where you, the customer, see it.

For some manufacturers, the technicalities of the material thickness are not crucial regarding product description. Brands instead focus on marketing terminologies to reflect the condom thinness.

Before you go thinking that brands hide a critical stat from you, let’s look at this a bit more closely. Brands realize that a customer wouldn’t know what the heck 0.05 millimeters actually means. The U.S. doesn’t even use the metric system as its standard.

Nowadays every brand has an ultra-thin product in their line-up for your ultimate sexy appreciation. We carry an array of ultra-thin condoms at our CondomJungle store so you can choose your favorite regardless of your preferences.

As we already mentioned, all brands offer at least a single ultra thin condom. Let’s take a closer look at what the individual brands provide in this ultra-thin category.

There's a whole category of Trojan Ultra Thin condoms. They differ in thickness, with the Trojan BareSkin being the thinnest, and also differ in shape. The orange button takes you to the particular product page for more information such as price and available discount.

Even Magnum, which is a label of large and extra large condoms from Trojan, has its thin-wall prophylactics. 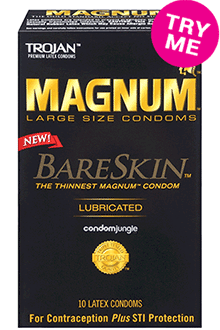 Durex has a couple of ultra-thin condoms. The table below gives you a quick overview. The Durex Avanti and the iNViSiBLE and great condoms for you to try. 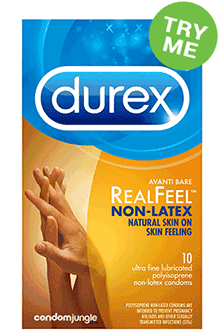 LifeStyles has a direct contender to Trojan’s ultra-thin products. With some impressive sounding product names, you will be satisfied with what they have to offer. 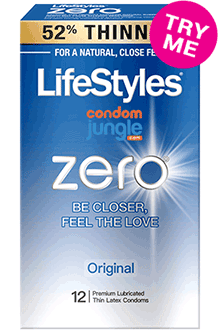 SKYN Condoms are all made of a material that feels soft and comfortable, but the SKYN Elite is even thinner than the rest. 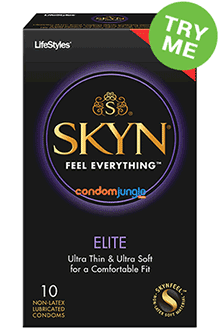 Vanish Hyperthin Condoms are 35% thinner than other options from this Boston-based brand. 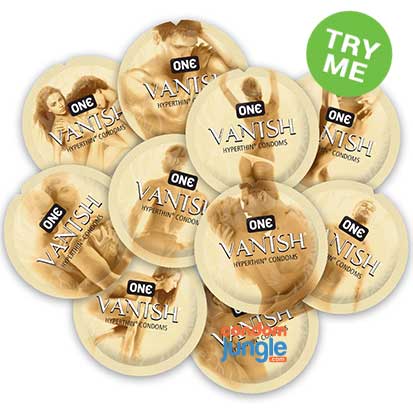 Kimono built its reputation in the last 25+ years on being the "ultra-thin brand". The whole line up boasts a better-than-average thinness. 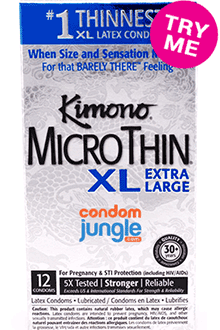 Another Japanese brand, Okamoto is all about ultra thin condoms just as the previous Kimono is.

Visit the ultra-thin category for our complete selection.

What are best ultra thin condoms?

Any of the products mentioned above are popular, and possible flagship products of their respected brands. Therefore, expounding on the best categorization is not imperative as personal preference comes into play. Take them for a test drive and let us know either via the condom reviews or comments below.

The fact is, condom users love ultra-thin prophylactics. There is a sort of psychological urge to use a condom that is as thin as possible since any added layer could psychologically get in the way of desired pleasure. No matter how thin, or ultra-thin, some people still think this way. We know that there is a bit more into creating the best feeling condom and we already touched on that earlier.

On the other hand, any polls we’ve done over the years among our customers showed that though the condom thickness is important, it's hardly the biggest issue for many. Remember that even standard condoms are manufactured quite thin.

Do ultra thin condoms have spermicide?

We carry these, so check out our Spermicidal condom category for more.

If this kind of condom is new for you, we encourage you to get yourself familiar with this type of prophylactic. Though they might not be the first choice for everybody, it's good to know about this option of barrier birth control.

We get asked this question very often, and we totally understand. It’s a legitimate concern, as one might equate something that is thinner as being more “fragile”. The health reasons why we use condoms in the first place are just too important not to wonder. As a result, the breakage rate for ultra-thin condoms has been a myth since their inception.

The good news is that condoms made today are incredibly durable and the quality of the material goes through a battery of rigorous tests.

So our answer to this question is No, they don't break easier! In the unlikely case that a condom breaks, it would most likely be due to not enough lubrication and other user-related reasons.

Ultra-thin condoms are available in multiple sizes. We categorize condoms into four size groups (S, M, L and XL) and several brands have this type of condom in every group.

You can see you have plenty of options when it comes to Ultra-thin condoms. They are the must-have for every brand and must-try for every condom user. They give you the feeling of being closer and allow you to enjoy the almost nothing-is-there experience.

You may have already tried some of these but if not, get to it!

That's it from us to you about ultra thin condoms. Be safe and Hump Responsibly.