When you absolutely, positively don’t want to get knocked up… that’s when you use spermicide condoms. What makes these rubbers even more dependable protection against unintended pregnancies is something that arouses a variety of questions for people who think all condoms are created equal.

Keep on reading to learn more about why you may want to use spermicidal condoms.

Condoms are an outstanding form of birth control. They are both inexpensive and easy to get without a prescription.

Condom effectiveness, if used consistently and the way you are supposed to is as high as 98 percent. In case you are wondering, this number refers to pregnancy prevention. Prophylactics also help reduce the risk of STDs and other related infections. We touch on the STD subject in conjunction with spermicide later in this article. There’s info you definitely want to know so make sure you don't miss it.

Spermicide is not new. For decades you could get this protectant in several forms, such as:

For the sake of our subject, we focus on condoms that are already pre-lubricated when removed from their wrapper.

What are spermicide condoms?

Spermicide condoms look like any other condoms, and their sole purpose is to add an extra layer of pregnancy prevention. What differentiates them from condoms without spermicide, is the type of lubricant that is on the outside of the condom. The particular lube contains spermicide nonoxynol-9.

Nonoxynol-9 is a type of chemical that kills sperm. This is useful in case of spillage, breakage or any other "accident" type of scenario. Nonoxynol-9 ensures that sperm won't reach the reproductive tract and mingle with a woman's eggs to attempt the fertilization process.

How do condoms with spermicide work?

It's quite simple. The spermicidal lube works as an added protective shield. In other words, the spermicide nonoxynol-9 serves as protection on top of the standard condom barrier protection.

No, no and no! Spermicidal condoms do not provide higher protection against STDs. This is important information to remember. Let's reiterate-- the word "extra" refers in this case to pregnancy prevention only!

How effective are spermicide condoms?

When you consider that condom effectiveness is as high as 98 percent, if you pair it with spermicide, logically, effectiveness only improves. That being said, there have been many opinions on this subject over the years. Some say that the amount of Nonoxynol-9 in the lube on the condom is not enough to make any significant contribution.

The World Health Organization stated in a release that Nonoxynol-9 is somewhat effective when used alone against pregnancy prevention. It's also less effective than the Pill.

Some experts even say that there is no evidence that nonoxynol-9 lubricated condoms provide more protection against pregnancy than others lubricated with silicone.

Note: Brands use silicone more often than any other condom lubrication during the manufacturing process.

What are advantages and disadvantages of spermicide condoms?

*More explained on this in the next section

Is spermicide bad for you?

What kind of condoms have spermicide?

At the time of writing this article, only natural rubber latex condoms are available with Nonoxynol-9 spermicide.

In theory, you could use your spermicide lubricant and slap it on any condom you decide. If you choose to use a condom made of natural rubber latex, you should be fine. A different question would be using it on a condom made of something other than latex.

There isn’t a lot of information regarding spermicide and different types of condoms because manufacturers don't talk about lube beyond the latex condom material.

So without any specifics on whether the Nonoxynol-9 spermicide may compromise condoms made of non-latex materials, it’s best to act with caution. Don’t use this type of lubricant on any condoms that are not made of latex.

It’s important to remember that you should always use a compatible lubricant, as recommended by the manufacturer. Incompatible lube sometimes damages the condom’s material structure and puts you at risk.

Trojan offers a number of these type of condoms. We also carry a single product of this kind from LifeStyles.

Nonoxynol-9 Spermicide covers the outside wall of all of the condoms featured below. Let's take a look at them now.

Trojan has a whole line dedicated to spermicide condoms. Those condoms are available in several types. Take a look below.

This condom is thinner than the average available out there. It has a straight wall condom shape, meaning that the condom width is the same from top to bottom.

Trojan ENZ has the classic straight wall shape, smooth surface and ends with a reservoir tip. 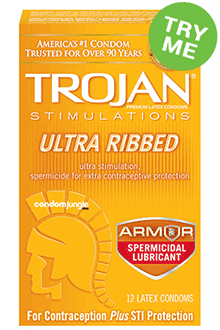 As the name indicates, this condom has ribs along the whole body, top to bottom, for stimulation. In regards to the shape, it's also a classic with a reservoir tip at the end.

Trojan Her Pleasure with Spermicidal Lubricant 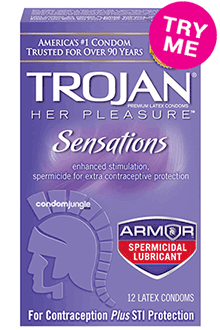 This condom has a bulbous end with texture for female stimulation. The first set of ribs is right above the base area while the second set is around the head. 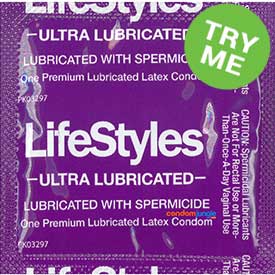 You get a flared shape along with a reservoir tip with this LifeStyles product.

As mentioned, whether you are a man or a woman, spermicide that contains nonoxynol-9 may awaken allergic reactions in your private areas.

The reactions vary from mild to more severe. The symptoms are sometimes similar to those of a rubber latex allergy. If you think you have any issue, consult with your medical professional.

Some users who don’t have an actual sensitivity or allergy also complain about the strength of the Nonoxynol-9 on condoms. If you are extremely sexually active and use spermicidal condoms in a short time frame, say 3 or more times in a day, you may suffer from some irritation issues.

The price of condoms with spermicide is about the same as condoms without spermicide. Check out the available products by scrolling back up in this article. Click the button below each product to learn more about price and discounts currently available.

We touched on this subject throughout this article, but we want to address it directly from an STD perspective. For some, the spermicide is too potent and it irritates the vaginal or rectal tissues, making it more prone to allowing STD viruses to enter the body.

Disclaimer: The content provided in this article is for informational purposes only and is not offered as a substitute for any medical advice. Seek immediate medical attention if you experience any issues or have questions and to learn more about spermicide that is beyond the scope of this article.

What you should remember about this type of condom:

Ok yes, we did mention all kinds of info you need to consider, but the bottom line is… Spermicide condoms have benefits so if you are not ready to be a parent, and especially if you are playing around, you might want to give these a try.