You’ve probably heard the nickname rubbers used interchangeably with condoms whether you are new to safer sex or an experienced pro. It’s a fitting name when you consider the type, elasticity and stretchiness of the standard condom material.

They look like a better, more sophisticated version of party balloons, and they are indeed a part of some of our happiest occasions. They even come in colors. So, let's party!

Most everyone knows what a condom is

Reiterating, especially for younger, less-experienced people, the reason for and the importance of condoms never hurts.   Condoms are a type of barrier birth control intended for men to wear over their penises. This protective sheath serves as a helping shield not only against unintended pregnancies but also STDs. As you can gather, a condom is a valuable device.

The exact time when condoms were invented is not all that certain.

What is true without a doubt is that they’ve come a long way since their early versions, which were quite crude. It's almost hard to believe that the material used to make condoms has been evolving for hundreds of years.

The old days had to be quite hard for the sexual wellbeing for both penises and vaginas alike. They did what they could with the resources they had. Back then, resourcefulness was the name of the game, and so animal parts served as the go-to condom material. They used animal intestines and even parts of fish, so we’ve heard, but don't ask us the specifics on that.

Rubber vulcanization and suspension of rubber

After centuries of whatever-you-could figure out, a span of less than 100 years saw two important changes in condom material. First was the rubber vulcanization process in 1839, which led to the mass production of condoms. Then, in 1920, the new suspension of rubber microparticles in water technology was invented, leading to safer and better condom making. The principles of this manufacturing process remain pretty much unchanged until the present time. When you hear “rubber” in reference to condoms, you can think of, and thank, these technologies.

There are now a couple of other condom materials, which we get into shortly, but suffice it to say that the last hundred plus years of advancements in manufacturing and technologies made this male protective device not only socially excepted but extremely reliable too.

Today's condoms are neatly wrapped and even have a stated shelf life. Moreover, because of their class 2 medical device categorization from the FDA, they have to meet the highest quality standards.

You would have to be crazy not to spend a buck to have safer sex anytime you do IT.

Let's take a look at the types of material generally used these days.

Natural rubber latex is the #1 condom material and has been for over a hundred years. It's stretchy, durable and seems like a match made in condom heaven. Throughout the decades latex condoms became thinner and therefore offering more sensitivity for their users. Because of the advances in manufacturing, we now have a variety of types of condoms for a broader demographic.

We can’t say for certain what was the first condom material ever used, but it was most likely some sort of animal intestines. You may or may not be surprised that, in a slightly altered and more advanced form, lambskin condoms are still around. In terms of condom standards, some consider these as a luxury item due to their higher price. More on this later.

They also have some effectiveness limitations so be sure to learn more about these. 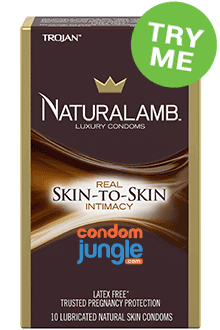 Medical grade polyurethane is another material alternative. Its inception dates back to 1995. It has the ability to transform body heat, letting you feel your partner much more intensely. There are also some minor disadvantages, however, such as the process of putting on the condom. These condoms don’t stretch as much as those made of rubber latex or polyisoprene so some men have challenges getting one of these over the head of their penises. For that reason, even though the condom is slightly wider, it typically doesn’t fit larger men very well. 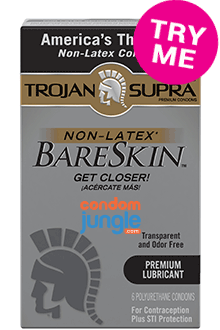 We saved the best for the last.

Polyisoprene is the newest material, introducing itself to the prophylactic world in 2008. Many predict Polyisoprene condoms to be the future, as it seems this material is the best of both worlds. Everything we know and anticipate from the time-tested latex material, Polyisoprene also has and then some. The lack of latex allergens is just the figurative cherry on the top.

Polyisoprene condoms are undoubtedly an awesome choice for users who have latex allergies or sensitivity. However, these are also a great option for any condom user. The reason is that it’s a super soft and comfortable material that feels great while still providing the maximum protection you can get today. It’s no wonder these condoms have a devoted following.

If these sound enticing, check out the SKYN Condoms product line.

Now that we’ve gone through the basics of the Big 3 condom materials, let’s do a bit of comparison shopping.

Differences between polyurethane and latex condoms

In a side-by-side comparison, it’s not an entirely fair competition between polyurethane and latex condoms. Due to its lack of elastic characteristics, polyurethane doesn't possess the same “huggy” feeling that natural latex does. Another downside of polyurethane is that it isn’t as readily available from other brands as latex condoms are.

Right now Trojan Supra is the only item available, which brings another "issue" and that is regarding the size. If Trojan Supra fits you, this condom may be for you. If you are not a medium size, you probably need to look somewhere else if you have a latex allergy and that means to polyisoprene condoms.

Differences between polyisoprene and latex condoms

These condoms are both synthetic in make-up so they are suitable for anyone with latex issues. If you want to compare these non-latex condoms, we’d say that polyisoprene is the clear winner due to its soft nature but you may like polyurethane – remember it transfers heat well – so give both a try. They both do the trick for their official purpose.

As we mentioned, the most commonly known condom material is natural latex, and this lasts up to five years. That is, of course, under ideal storing conditions. Do not expect the shelf life printed on the wrapper to hold on that long if you keep your rubbers in your car or other undesirable locations. Remember, extreme hot or cold affects your “rubbers” more than you might think.

Use your common sense and store your condoms somewhere that has a stable “room temperature”. This advice applies to prolonged storage in particular. Let's say you buy your supply of several boxes. Before you use them, keep them in your closet, bedroom nightstand drawer or similar place. You don’t want to keep them anywhere there may be issues like the glove compartment of your car, which swings from very hot or very cold depending on the time of year.

Condom lubrication varies in amount and consistency depending on the product. In general, manufacturers use silicone-based lube in the production process. In the last stages of the product assembly, machines add a small volume of lube to the condom before the foil wrapping part.

We can’t stress this enough -- read the retail box for any particular lubrication type limitations.

As it is widely known, there are two core reasons for condom use – to help with STD protection and pregnancy prevention. Condoms work exceedingly well for those who use them consistently.

Aside from the already mentioned lambskin condoms (Naturalamb) all of the other above specified condom materials help with STD protection.

Condoms are a barrier form of men's birth control, and that is true across the board, regardless of the material. This includes lambskin (Naturalamb).

Condoms, in general, are very affordable. To be a bit more specific we should say that condoms made of natural latex and polyisoprene are about the same. A box of 10 or 12 costs you around $10 give or take.

Polyurethane condoms are slightly more. The box of Trojan Supra, which comes in boxes of 6, also costs around the $10 price range.

Naturalamb is a genuine specimen of luxury in terms of price. A box of 10 of these prophylactics can go anywhere from $30 to $40, and in some cases even more.

We always try to give our customers a great value to pay attention to deals throughout the CondomJungle store.

We breezed through the condom material varieties that are available today for making safer-sex penis apparel. So the next time you shop for condoms you know what to look for and what options are out there.

Not all condoms are the same and there is a reason for that, so keep exploring and as always Hump Responsibly.