When you think of male contraceptives, a Glow in the dark condom may not be the first to pop into (or, ahem, onto) your head.

Yet, these "glowing" condoms are quite popular among many couples as an amusing type of prophylactic protection.

Glow in the dark condoms definitely put on a show, causing copious chuckles during coitus. On top of that, they are also as reliable as any other condoms.

What are Glow in the dark condoms?

A Glow in the dark condom is exactly, as the name suggests, a condom that glows after you turn the lights off.

"Expose the condom to a light source for about 30 seconds"

How does it work?

There is an additional initial step you need to follow to make this specially designed glow in the dark condom light up.

This is how you do it:

1. Expose the condom to a light source for about 30 seconds.

2. Put the condom on

3. Turn the lights off and have fun

Also read: How to put on a condom

Still curious about these playful prophylactics? Stay with us.

Get a sample or a pack today!

What makes the condom to glow?

The manufacturing technology uses a non-toxic phosphorescent pigment that is safe to use in conjunction with this medical-grade product. The patented 3-layer manufacturing process seals the phosphorous pigment ( glow in the dark powder) between two layers of natural rubber latex.

During the phosphorescence process, the substance (i.e. pigment) absorbs energy when it’s exposed to light then slowly releases the energy, creating the known 'glow-in-the-dark" effect.

Glow in the dark technology has been around for a long time and was used for the first time on condoms in the late 1980s.

Today, there are many commercial and novelty products that use glow in the dark technology, including safety markings, night aids, glow sticks and more.

Some of these products feature newer, advanced glow in the dark technologies that glow well beyond the 30 minutes we see in glowing condoms.

Throughout the history of condoms in the modern era, there wasn’t much innovation since the 1920s when the vulcanization process allowed for thinner rubber. Rubbers worked, yes, but they were relatively boring. They served their purpose. That’s it.

Enter the decadent decade. Years of freewheeling behavior, and the AIDS epidemic crisis, eventually led us to the Glow in the dark condom concept by the late 1980s. These prophylactics, along with others such as flavored varieties, made condoms more fun, and more likely for people to use consistently.

What else should you know?

Glow in the Dark Condoms 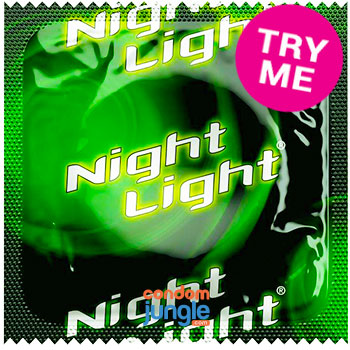 Want to try it?  Order a sample here!

Want to try it? Order a sample here!

These condoms are as durable and reliable as other latex varieties.

It depends on where you are buying, but the prices are more-less equal to the cost of a regular 12-pack, which could be anywhere between $10-$12.

Note: We recommend avoiding condoms that are noticeably cheap. There is always a reason (usually not a good one) why these merchants sell condoms at heavily discounted rates.

These types of condoms are made from natural rubber latex so you should not use an oil-based lubricant. Oil-based lubricant weakens the latex material structure making it more prone to breakage.

If you want additional lubrication, use water-based lubricants just as you would use with other regular latex condoms.

Always check the condom’s wrapper or packaging for additional instructions and warnings. You may encounter some novelty products intended for entertainment purposes only and not recommended for use as pregnancy and STIs protection.

Glow in the dark condoms bring lovers lots of amusement, resulting in high reviews mainly for their fun and entertaining nature. 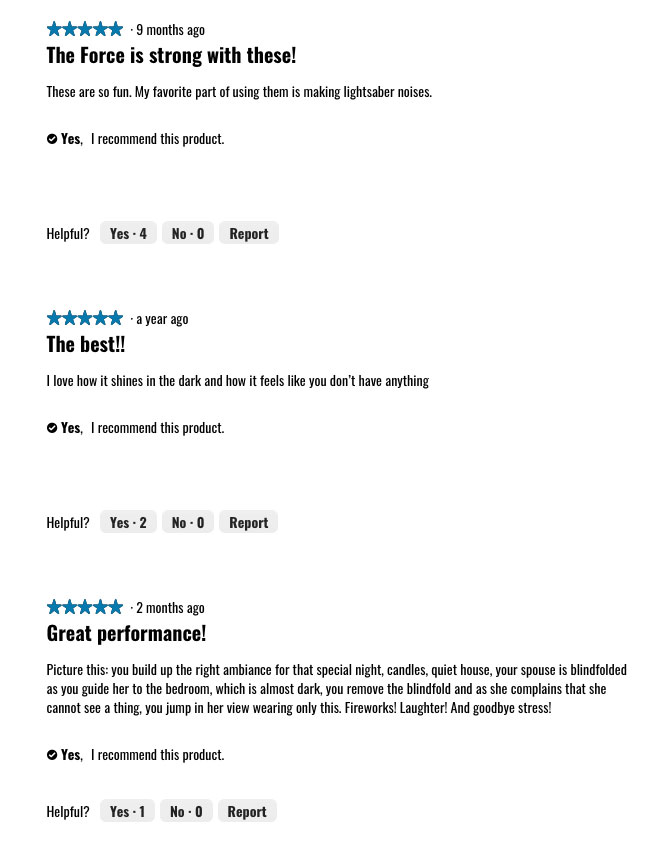 These are some serious reviews straight from Glow in the dark condom users.

Visit one of the product pages and read real customer reviews from people who purchased Glow in the dark condoms through our CondomJungle store.

A typical expiration date for Glow in the dark condoms is around the same length of time as for other latex condoms (2-5 years). You can always find shelf life info printed on the wrapper and the product box.

Do glow in the dark condoms work?

Yes, they work as long as you use them as directed.

Will glowing condoms glow with std?

Though it is an interesting idea, the answer is no. They don't have this capability and will not glow if the material detects the presence of STDs.

Is a glow in the dark condom safe?

They are FDA approved, and that means safe for you to use.

What colors are Glow in the dark condoms?

Today, there is one glowing color—green.

To Wrap It Up

Sex should be safe and fun.

Glow in the dark condoms check both of these boxes.

Now, it's time for you to give glow in the dark condoms a whirl. We know they’ll light your way to a sexy, fun adventure.

Get a sample or a pack today!

How to Put on a Condom: Step by Step Instructions

13 Types of Condoms for Your Ultimate Fun Time