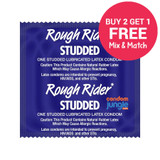 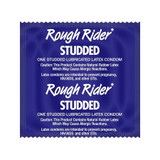 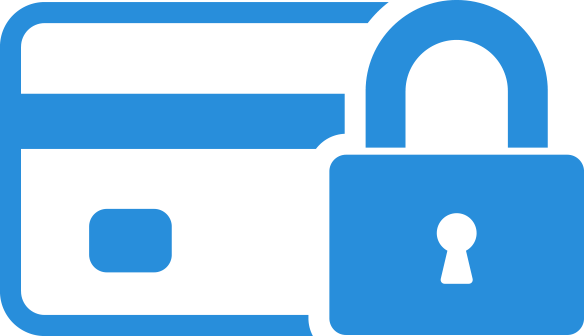 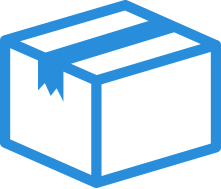 When you want extra stimulation, Rough Rider Studded is the condom you want to try. Seductively studded up and down and all the way around to provide extra sensation and excitement.

Not sure what other condoms in different sizes are available? Check out our condom size chart featuring more than 50 high-quality condoms.

Need help with lasting longer? Learn about what condoms and more can help here.

New to condoms? Learn how to put on a condom step by step here.

Got introduced to these the hard way. Had never heard of them before. Was at my girlfriends place, she's in the kitchen yacking away with her sister so I go into her bedroom to watch CFB in peace, while they get ready for a family get together. Relaxing on her bed, hands behind my head when I glanced over and see the a blue packet, top torn open on the nightstand just behind the lamp. Think nothing of it till I get up to pee and see the writing on the little packet and pick it up to my surprise!! So I'm thinking like, "Oh, WOW!!! She's used it on some sex toy!!" So I start snooping around looking for it. Eventually glance in the waste basket and find two clearly used and tied off rough riders condoms in amongst used tissue and cotton balls she used to remove nail polish. One of them looking like it had two heaping teaspoons of jiz in the reservoir tip. So I'm in complete shock, can't confront her as her family is over for a barbecue. So I suck it up and try to act normal. It's late when they leave and I finally get the courage to confront her. Everyone had been drinking, which didn't help as she opens up on me for snooping and that I'm paranoid and crazy! Obviously, she must have sensed something was wrong with me earlier, and the evidence is now gone, waste basket emptied and dirty laundry including the sheets that had previously been on the bed tossed into the washing machine. So this is an issue....long story short, after this incident, It comes up multiple times she eventually just says. "At least he wore a condom!!!" After which point the argument morph from I'm crazy and paranoid to it being a consequence of some fishing trip I really wanted to go on with my buddies. She refused to ever say more. So like six months go by and we are in a convenience store getting some beers and I see the box of 3 rough riders and suggest to her we get a box. And she's like "Definitely not! Some guys just can't rock those!" I'm like crestfallen, and getting back in the car I'm like "what happened the left over third condom??" She's like, "aahhaaaa.....he buys them in boxes if 36...." First clue this had been something other then a one-time Tinder hookup. I press the issue after that, two weeks later the pandemic hits and I get dumped over the phone. Now I've got an obsession to try these out for myself, if the pandemic ever ends and I can finally meet someone else.

This pack seems a bit too tight

This pack seems a bit too tight than the last one I bought!