When Trojan Ecstasy first came out, their unique style made some take a second look and wonder. How is this baggy condom going to feel? It is clear by now that the appearance is not the only differentiator. 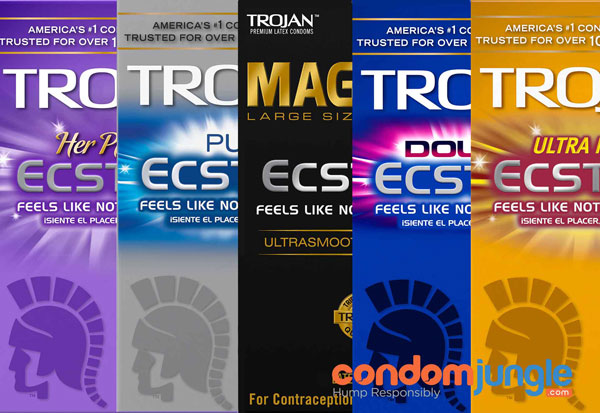 Condom brands are on a quest — to continually develop products that fulfill more than the principal function, which is protection. Though the shield is beautiful and effective, some take the product too lightly. In fact, there are men who object that condoms keep them from having a fully pleasurable experience and opt out of using them at all.

Trojan Ecstasy achieves both the mandatory function as well as nice-to-have features. In this article, we highlight this product line in its entirety.

You have to admit, Ecstasy is an excellent name for a condom. If you look at this word’s definition, ecstasy means an overwhelming feeling of great happiness or joyful excitement. Quite fitting for a product used for intimate encounters. Wouldn't you agree?

The uniqueness of the Trojan Ecstasy line is in its shape. The advanced condom body provides a more natural experience for a man's penis.

Let’s go into this a bit deeper.

The reason for developing a new, somewhat unconventional looking condom shape is to increase pleasure.

The general issue with the standard shape is that some believe it to be a “restrictive” fit, which reduces a user's sensitivity.

In the case of Trojan Ecstasy, there is no “restriction” because the condom is more prominent around the head and that creates the natural feeling experience.

Another innovative feature is lubrication. Trojan Ecstasy has lubricant inside and out, and this has a direct, positive effect on user's sensitivity and comfort.

The most obvious differentiator is the look, which affects the feel and that’s what counts the most. Unlike other condoms that have a reservoir end (the small tip on top), Ecstasy’s most recognizable feature, as Trojan calls it, is its super bulbous end.

If maximizing your penis’ pleasure is your priority, you will find Trojan Ecstasy a fantastic enhancement.

As mentioned, Ecstasy condoms come pre-lubricated inside and out with Trojan’s UltraSmooth lube to give both partners a more natural feel.

If you usually dress up your manhood in regular or large size, and possibly even extra large, you should fit into these rubbers just fine. Since every guy’s member is just a little bit different, we recommend trying a few Ecstasy variations to determine your favorite fit. Refer to the size chart below for more on the individual product specifications.

Trojan Ecstasy condoms are available in natural rubber latex. This material is soft to the touch and feels like an advanced form of the typical material we think of in most manufacturers’ condoms. It’s latex, but kind of a better version.

Warning: if you are sensitive to latex, seek out non latex condoms for a more appropriate alternative.

Ecstasy condoms perform similarly to any other Trojan natural latex condom as well as those of other brands. This means Ecstasy provides reliable protection to help reduce the risk of transmitting STIs and unwanted pregnancy.

After tearing the wrapper open and taking the condom out, it's time to put it on. This part is standard for any brand or type. Some users complain they sometimes have a little difficulty getting condoms to roll down their shaft smoothly after they put it on the tip of their penis.

Most users state that they easily put on Ecstasy condoms. This could be thanks to several factors such as the lube inside and the softness of the natural rubber latex, among other things.

Try this on your own if you are curious.

What's better than regular Trojan Ecstasy? You guessed it. Trojan Double Ecstasy. Like all condoms in this product line, this one has lube inside and out.  However, Double Ecstasy features a more intense variety of lube on the outside for your partner’s pleasure. Scroll down to see this condom in more detail.

Brands don’t categorize condoms specifically for uncircumcised vs. circumcised men because it’s hardly an issue for a user. However, due to its spacious end, you can easily see how uncircumcised men might favor the Ecstasy shape a bit more. The foreskin, which is a place that has lots of nerve endings, benefits from this "freedom of movement" as Trojan nicely puts it.

Having said that, let us repeat this again to avoid any misunderstandings.

We never said that this shape leans towards the uncircumcised demographic, only that many non-snipped men find it comfortable. Snipped or not, experiment and see the Ecstasy effect on your own your penis.

Comfort shape — Super bulbous end — Lubricated inside and out — Tapered base

If you typically use classic shape condoms, you may find Trojan Ecstasy a bit unusual when first looking at the shape on the backside of the product box. Once you take it outside the wrapper, the condom doesn’t look that much different from any other. It performs well in all categories (protection, feel, etc.) so…

Go and get Trojan Ecstasy and try it. See if you notice, and prefer, the difference this product line offers. While at it, introduce yourself to Trojan Bare Skin, the 40% thinner condoms. As always, Hump Responsibly®!