People are intimately active everywhere so it makes sense that there are condom brands all over the world. Like in every industry, some are more successful than others, and brands come and go. 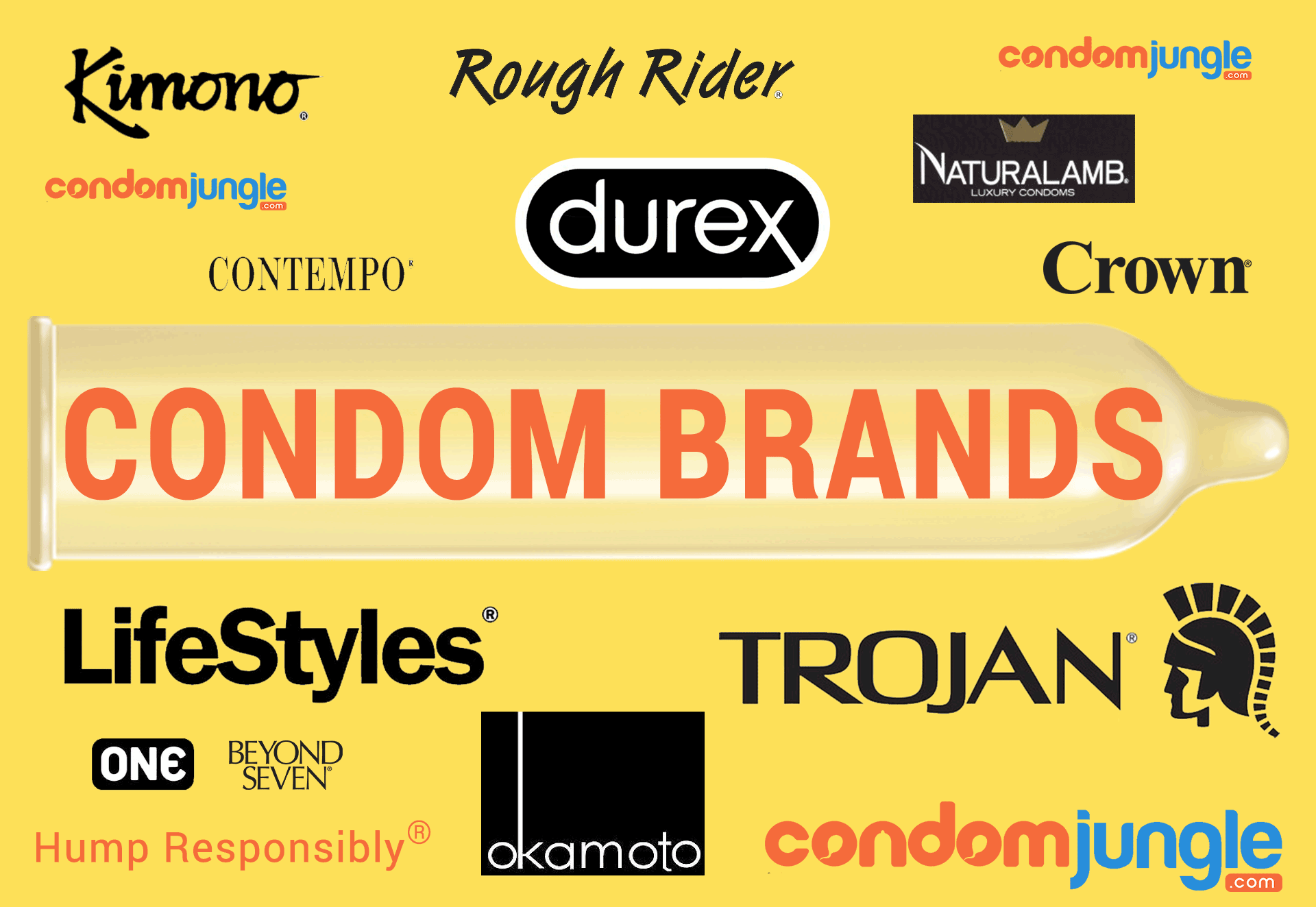 The majority of the world’s condom brands are small, and their reach doesn't cross the borders of the country in which they operate. Then there are the “big boys” that reach sizeable markets or have a global presence.

Some small condom brands are projects of enthusiasts with a mission to create a condom brand that makes the difference. They are usually around for a bit before they disappear.

The leading condom brands have long traditions that go back even a hundred years. These brands have the necessary know-how regarding research and resources to drive industry innovations. They also produce products that differentiate themselves in overall quality and wide selection.

The most private product

Condoms are among the most private products there are. Given the area that they protect, it’s no wonder that users value brand recognition over anything else. They want a brand they can trust and a product that works.

Having flashy or funny looking wrappers, with an average or subpar condom inside will not make you a successful brand in the long run. Users most likely won't give you a second chance since there are other, possibly better products.

Party condom impersonators fall into this category. They are a novelty so treat them as such.

Condoms are essential in helping to prevent unwanted pregnancies as well as in protecting us from a variety of sexually transmitted Infections (STIs). As stated, users lean towards condom brands with a stellar reputation.

In this article, we highlight a few of the most trusted condom brands based on, their popularity, long history and market share. People turn to these when they want to have safer sex.

Some of them have extensive selections while others offer but a couple of products.

How do you choose your brand?

Have you ever thought what makes you select your favorite condom brand? Is it the logo, product selection, packaging, color or perhaps an ad or commercial you saw somewhere? Or, do you grab a bunch and make your choice based on personal preference after running a few test drives? Do you pick your brand and usually stick with it forever, or do you not care what you use as long as you have something you can trust?

We open our list with a brand that knows plenty about being successful and trusted by its users in North America. They prove it decade after decade.

Trojan Condoms is a U.S.-based brand that has a long history of manufacturing condoms. To track the history of this brand, you need to go all the way back to 1916 when they started. Trojan is America's most trusted condom brand and the undisputed champion on the U.S. market. They have an extensive line of over 30 products and counting, which includes everything from climax-control condoms to ribbed and non latex materials.

Trojan is the only brand that has a dedicated line of products for well-endowed men called Magnum. We look at this exclusive product line later in this article.

The brand's success is a mix of a long history, quality products, vast product research among other things. Trojan keeps a dominant presence at a variety of drugstore chains from coast to coat. There are even Halloween costumes of Trojan wrappers.

Suffice it to say, Trojan is the first brand that typically pops into an American’s head when the topic of prophylactics arises.

As we mentioned, Magnum Condoms are a part of the Trojan brand. This exclusive product line covers men who need more width and length. Other brands have a large condom or two in their roundup, but only Trojan has a product line on the market dedicated to men with substantial bulges.

If you feel that the regular Trojan just doesn’t cut it for you, Magnum should be the answer.

Naturalamb is another product from Trojan. It features a single option: a non-latex condom. It is a unique prophylactic because of its material composition. We recommend learning more about this condom since you won’t find anything else like it on the market today.

Now that we’ve breezed through the extensive selection of Trojan Condoms let’s give space to another condom giant. The next condom brand also has a global reach. Let's suppose you take a trip around the world. Regardless of the countries on your itinerary, you might just spot this next brand.

Durex is a United Kingdom-based company and is THE number #1 condom brand when it comes to worldwide notoriety. According to the history books, Durex manufactured its first condom back in 1915.

Nowadays, the Durex selection is not a tough competition to Trojan in terms of product count. However, users around the world turn to Durex for protection, reliable quality, and reputation.

Click this link to see the selection of Durex condoms.

LifeStyles is an Australian company that is without a doubt a serious competitor to the previously mentioned condom brands. Established back in 1905, they’ve grown to be one of the most popular brands today. Regarding selection, this brand is the next closest competitor to Trojan, offering over 14 condom types/products.

LifeStyles has two big Aces in its lineup. The first is the non-latex SKYN condoms, which are the only polyisoprene condom product line on the market. We give more info on SKYN in an upcoming section.

The second Ace is Snugger Fit, which is quite a popular size, and surprisingly a size not offered by Trojan.

SKYN Condoms are a real innovation in the otherwise slowly moving condom industry. Introduced in 2008, SKYN condoms are made of a non-latex material that is soft and comfortable.

You can hardly tell it's not your standard condom. It's stretchable and also looks like latex. If you've never used a condom that looks like rubber latex and feels even better, you have to give SKYN Condoms a try.

Click this link to see the selection of SKYN condoms.

Kimono has been making condoms for over a quarter of the century and is very proud to have "America's thinnest family of condoms", which features six products.

The Kimono brand uses "state-of-the-art Japanese technology" to make its premium latex condoms. Another significant differentiator is that these are also vegan-friendly with no animal milk proteins. If you and your penis are vegans put Kimono into action and everyone is happy.

Check out the Kimono selection by clicking the following link.

Okamoto sold their first condoms back in the mid-1930s in Tokyo, Japan, and their products are still made in that country. Therefore, Okamoto is stronger is the Asian market than in North America. Like Kimono, Okamoto is known for manufacturing very thin latex condoms, and officially sells only two products in America.

Beyond Seven is a sister company of Okamoto, which we just talked about and enjoys a reputation as a maker of high-quality rubbers.

Go to Beyond Seven category

Crown offers two condoms in the U.S. This brand is mainly known for their thin latex manufacturing technology in a signature, light pink color. They also provide condoms in an assortment of other colors to stimulate your visual senses. Seems safe to say that Crown likes color…

ONE is a relatively young condom brand, established in 2004. Based in the U.S., this company is known for their circular wrappers in many fun designs. ONE offers types of condoms in several varieties, including large, studded and thin.

Go to ONE category

Originating in the U.S., Caution Wear is a small label with a line of several types of condoms. We carry their hit product, which is a smaller or tighter condom, called Iron Grip. If you need smaller condoms you should give this a try.

Rough Rider condoms are produced by Ansell, which is the maker of LifeStyles and SKYN brands. We offer their studded condom.

Just like Rough Rider, Contempo Condoms is also a small label produced by Ansell the made of LifeStyles and SKYN condoms.

Now that we’ve made it through a quick round-up of condom companies, we want to give you just a bit more info.

In the U.S. condoms have to pass quality standards set by the FDA to receive their certification.

Major condom brands that manufacturer their own products put their condoms through a series of tests throughout the entire production process. They do this not only to meet the FDA requirements, but they really want to surpass them.

Brands literally electronically test every condom for holes, but it doesn't stop there. The manufacturing process runs through a series of tests, like water and air burst tests, to ensure reliability and high-quality standards.

You may never have thought about it before, but it’s always nice to know your products make it through QC.

As you can see, you have a choice of condom brands. Regardless of your personal preference, the brands featured in this article give you the peace of mind that you are using quality products.

If you’ve only used one or two brands, or maybe this is your first time ever using condoms, we recommend picking a few and taking them for a test ride. You may find a favorite, and at least, you know you will safely have fun. Hump responsibly!